ECB's media release has highlighted inconsistencies in some of their beliefs.

The England and Wales Cricket Board’s attempt to justify their decision of axing Kevin Pietersen through a media statement has fallen flat, thanks to reiteration of some vague lines that were first dished out a few days ago, while simultaneously listing points that throw up pertinent questions relating to team ethic, writes Karthik Parimal.

It was an outrage of towering proportions against the England and Wales Cricket Board (ECB) a few days ago, albeit completely anticipated, for it’s impossible to get away without putting forth a sensible point justifying the surprise exclusion of one of your best players. After the powers that be convened in the boardroom and ‘unanimously’ arrived at a verdict on Kevin Pietersen — by far England’s best batsman during recent times — the rationale, listed and released, was opaque, vague and, some would rightly argue, defied logic. In short, it was a reflection of how a few sporting bodies have been functioning of late.

While the broadsheets and tabloids were yet to print Pietersen’s axing, the news, as has been the norm since the last few years, spread on social networking sites like a bushfire. The astonishment at the absurdity of the decision soon turned into indignation, and what many thought about the head honchos was compiled on Twitter under the hashtag ‘#ECBClowns’, instigated by (American and British) television show host Piers Morgan, who’s been one of the most vocal advocates of Pietersen ever since the latter’s entry into sport. Morgan seldom refrained from tagging ECB’s official account in his tweets and, on more than one occasion, compelled them to give the paying public a valid reason for Pietersen’s off-handed treatment.

While most of Morgan’s ranting is usually taken with a pinch of salt, even the harshest of his critics — who are plenty in number — couldn’t disagree with his viewpoint this time around. Not only has Pietersen been England’s best player across all formats, he’s their most popular asset every time they embark on a tour. Why then, was he sacked?

Although the ECB did not divulge any information in their first press release, it was later mentioned by a few reports that apparently, the English players, led by their captain Alastair Cook, called for a meeting a day after England had gone down 4-0 at Melbourne. It was here that Pietersen made his feelings known against Andy Flower’s military style of operation. His two cents did not go down well with some and it wasn’t long before Flower was let in on what transpired, which led to a series of exchanges between all involved. The ECB, though, maintained that he wasn’t included in the squad, for “now was the time to start the rebuilding process after England’s disappointing winter in Australia.”

It was at this juncture a few revered members of the cricket fraternity chipped in with their thoughts. The underlying theme of the questions posed by former players, ranging from Ian Chappell to Ian Botham to Michael Vaughan, was this: shouldn’t the captain and the coach be well trained to handle personalities like Pietersen in the dressing room? Massive egos are part and parcel of every team sport. Is voicing an opinion against an employed modus operandi reason enough to wield an axe on a player? Timely columns from renowned cricket writers ensured there was no dip in the intensity of the furore against the decision makers. Five days later, the ECB, perhaps having had enough, promised to release a statement revealing reasons for the axing.

The statement commenced with the ECB’s focus solely on the criticism it was at the receiving end of for the last few days. “It has been a matter of great frustration that until now the England and Wales Cricket Board has been unable to respond to the unwarranted and unpleasant criticism of England players and the ECB itself, which has provided an unwelcome backdrop to the recent negotiations to release Kevin Pietersen from his central contract,” the  first paragraph of the release read. Respond, the ECB did, but as stated by Vaughan in one of his tweets, it was a “masterclass [sic] in how to add fuel to the fire.”

While recognising Pietersen’s contribution to English cricket, the statement reiterated the point that the reason behind the axing was to rebuild team culture. An interesting addition, although coated with a layer of diplomacy, was this line: “To do that [rebuild] we must invest in our captain Alastair Cook and we must support him in creating a culture in which we can be confident he will have the full support of all players, with everyone pulling in the same direction and able to trust each other. It is for those reasons that we have decided to move on without Kevin Pietersen.”

It’s evident that Pietersen was unhappy with his team’s current approach. But since when has a difference of opinion been bad for team sport? It’d be interesting to know how divisive this ‘difference of opinion’ was, but the ECB refused to disclose more than what was already known, stating, “Clearly what happens in the dressing room or team meetings should remain in that environment and not be distributed to people not connected with the team. This is a core principle of any sports team, and any such action would constitute a breach of trust and team ethics.”

The underlying theme of the questions posed by former players was this: shouldn’t the captain and the coach be well trained to handle personalities like Pietersen in the dressing room?

The last statement plants two pertinent questions. Firstly, if what happens in the dressing room or team meetings must stay within its confines, how ethical was it when details of a ‘players’ meeting’ was divulged [apparently by some player] to the Team Director and other staff? Secondly, a few English players, throughout the duration of the back-to-back Ashes, have revealed titbits pertaining to team camaraderie or ‘mood in the camp’ to ghost-writers for their newspaper columns. A couple of players have their autobiographies published, too, this when they were at the peak of their careers. They certainly did not hold back punches in the books. Why weren’t they sacked? Or even just reprimanded? Does this not fall under “breach of trust and team ethics”, then?

Another noteworthy point is the statement’s indirect reference to Morgan’s relentless bashing through the digital media. “Following the announcement of that decision, allegations have been made, some from people outside cricket, which as well as attacking the rationale of the ECB’s decision-making, have questioned, without justification, the integrity of the England Team Director and some of England’s players,” it reads. Morgan claims to know what transpired during the meeting and has openly termed wicketkeeper Matt Prior a ‘backstabber and a flaming hypocrite’. Regardless of the authenticity of Morgan’s allegations, one would imagine a board of ECB’s stature to have a thick skin and bat down scathing criticism from “people outside cricket.” That, however, doesn’t seem to be the case.

If this was ECB’s attempt to justify their decision, it has most certainly fallen flat. The press release has only perplexed, maybe even amused, a few, and it’s safe to say that inconsistencies in some of their beliefs are glaring. Maybe the cricketing world will be let in on more once Pietersen’s contract expires in coming September. 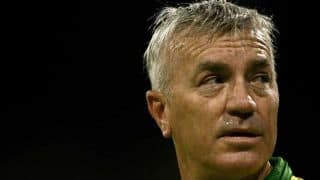