Ed Joyce, born on September 22, 1978, is an Ireland batsman who first played for England. Bharath Ramaraj looks at the career of a cricketer who is the hope of Irish cricket. 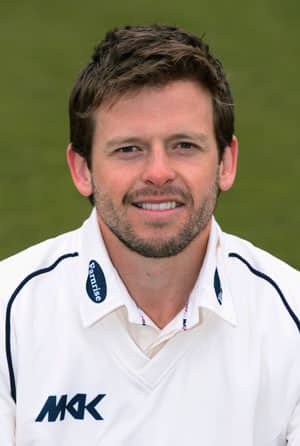 Ed Joyce, born on September 22, 1978, is an Ireland batsman who first played for England. Bharath Ramaraj looks at the career of a cricketer who is the hope of Irish cricket.

As cricket romantics, we marvel at the sheer unlimited grace and elegance of those aesthetically pleasing batsmen brandishing a willow like an expressionist painter and revivifying our sagging spirits from the mundane to exalted heights.

A little more than six years ago, when Ed Joyce drove the ball with surreal beauty and with a languid style, played some sumptuous lofted shots during England’s crucial one-day match against Australia at Sydney in 2006-2007, there was a whiff of a mystical brilliance attached to his game. Just for a few minutes, it rekindled fond memories of David Gower’s elegant splendour and silky smoothness at the crease.

Edmund Christopher Joyce popularly known as ‘Joycey’, ‘Spud’ and ‘Piece’ was born on September 22, 1978, Dublin. Until 2005, Joyce was a glittering-star of Irish cricket. However, as the Irishman always held ambitions to play at the very highest level, he completed his English residency qualification and switched his allegiance to England by 2005.

Alas! He never seemed to enjoy the confidence of English selectors for long and by 2010, took a firm decision of again playing for his country of birth — Ireland.

Joyce was educated at Aravon school, before he joined Presentation College and Trinity College. Joyce developed his cricketing skills in the peace and tranquillity of quintessentially, well-manicured, scenic Irish grounds. He came through the ranks by playing for teams like Ireland Development X1, Irish Schools, Ireland under 18s, Ireland under 19s as well as Ireland A.

In 1998 at the age of just 19, Joyce was selected to play in a two-match unofficial one-day series against South Africans. Pitted against some big names like Allan Donald, Shaun Pollock, Pat Symcox and Steve Elworthy, Joyce couldn’t pass the trial by fire with flying colours. But it must have been an enriching experience for him to face up to some world class bowlers.

In no time, Joyce’s ability to break the interstices of the field with his languid lissom elegance caught the eye of Middlesex’s management. During the English summer of 1999, he made his second X1 debut for Middlesex and by the fag end of that County season; Joyce even played his first County game against Worcestershire.

For a while, Joyce struggled to break into a strong Middlesex batting line-up consisting of names like Andrew Strauss, Stephen Fleming, Owais Shah and company. But in 2001, in what turned out to be a high scoring County game against Warwickshire, played at Lord’s, Joyce essayed his first century in County cricket.

In Vasbert Drakes, Dougie Brown and the ever-consistent, Andrew Richardson, Warwickshire had a fine bowling line-up at their disposal. So, it could be argued that his century against Warwickshire was a watershed moment in Joyce’s First-Class career. Joyce followed up that century with another superlative hundred, full of vibrant grace and elegance against Worcestershire.

The highly motivated, Joyce soon became the scourge of bowlers in County cricket. He accrued over 1,000 First-Class runs for five consecutive seasons from 2002 to 2006. Joyce was also a prolific run-getter for Ireland in the ICC trophy, held in 2001 as well as 2005.

In particular, the 2005 edition of ICC Champiosn Trophy turned out to be an annus mirabilis for Joyce. In that tournament, he ended up with a Bradmanesque average of 99.75. It was also an important period in Ireland’s cricket, as seasoned veterans like Jason Molins, Peter Davvy and Angus Dunlop had hung up their spiked boots. The baton of shoring up Ireland’s batting line-up had been passed onto cricketers with burgeoning potential like Joyce, Niall O’Brian, Kevin O’Brian and Eoin Morgan. Qualification to play for England

By 2005, Joyce had qualified to play for England. With Joyce’s personal balance sheet in First-Class cricket looking highly impressive, he was drafted into the England One-Day International (ODI) setup in 2006.

Interestingly, Joyce made his ODI debut against the country of his birth — Ireland. To make it even more intriguing, the Ireland setup picked his younger brother, Dominick Joyce for that match played at Belfast.

Cruelly for Ed, just before the ODI series played against Sri Lanka in 2006, he sprained his ankle and was ruled out of playing any form of cricket for four weeks. Even when he made a successful comeback from the injury, he struggled to leave an indelible mark in a few one-day games against Pakistan.

In spite of making truckloads of runs in the County circuit, English selectors didn’t select him in the original Ashes squad to tour Down Under in 2006-2007. But with Marcus Trescothick unfortunately retuning back to England, due to his stress related illness, it left the door slightly ajar for Joyce. England’s then chairman of selectors, David Graveney wasted no time in announcing that Joyce was going to replace England’s swashbuckling opener, Trescothick ,in the Ashes squad.

Joyce wasn’t picked to play in any of the Ashes Tests, and as a result, had to bide for his time. Finally, a battered and humiliated English cricket’s think-tank turned to Joyce for the one-day tri-series played between England, Australia and New Zealand.

After initially struggling to cope up with slightly different conditions in Australia, the crowning glory of his international career came in the crucial must-win game against Australia at Sydney.

Just for a moment, jog your memory back to the scenic Sydney Cricket Ground (SCG) in 2006-2007, where every shot that Joyce essayed was a mere caress rather than bludgeoning the ball to the boundary boards. With divine wrists and esoteric timing, he washed away the challenge of facing up to the likes of Shaun Tait, Glenn McGrath and Nathan Bracken with aplomb. He especially, took a heavy toll on Australian speedster Tait.

It was an innings in which Joyce touched rarefied zones as a batsman. Even when his bottom-hand came off his bat handle, while trying to essay a cover-drive of Andrew Symonds, the ball still rocketed to the boundary boards. Joyce’s aesthetic beauty and sublime mastery with a willow invoked respect and won him high praises from even Australian commentators.

However, as Joyce played in what was a very unsettled English setup, it became difficult for him to cement his place in the side. There always seemed to be an air of inevitability about him being dropped. After a rather disappointing World Cup in the Caribbean in 2006-2007, he was hunted down by the selectors and shown the exit door.

Actually, barring the match against Kenya, every time Joyce came into bat, he seemed to be a cricketer who was thinking more about whether England’s think-tank would wield their axe and drop him from the side.

Despite being named in the provisional squad to play in the ICC Champions Trophy 2009 in South Africa, Joyce largely became the forgotten man of English cricket. It meant he was now harbouring hopes of again playing for his country of birth — Ireland.

By 2010, he was named in the Irish pre-World Cup touring party — more than five years after his last game for Ireland. He was even granted special dispensation by the ICC to represent Ireland in the showpiece event of cricket held in the subcontinent.

On him playing for both Ireland and England, Joyce said, “When I made the decision in 2001 to try and play for England, it was with a view to trying to play Test cricket which is the pinnacle of the game and which of course Ireland doesn’t play. While I strongly believe I’m good enough to play Test cricket for England, I’ve taken the decision now to try and play for Ireland again. There are a few reasons for this, with the most obvious being that I’m a born and bred Irishman. Secondly, I feel I have a lot to offer to Irish cricket. I had a very successful 2009 with Sussex winning the Most Valuable Player award for the Friends Provident Trophy and also two winners’ medals in theTwenty20 Cup and NatWest Pro40 competition. I feel I’m playing the best cricket of my career and would like to bring this form with me to help Ireland be even more successful on the world stage, a success which I am committed to running in tandem with my Sussex career, in the same way that other Irish players have satisfied club and country commitments really well.”

Other than an enterprising knock of 84 against the West Indies, Joyce didn’t exactly set the World Cup on fire. But since then, he has been a consistent performer for the Ireland setup.

In the recently concluded one-day series against the unpredictable Pakistanis, Joyce’s well-measured century in the second game at Belfast helped Ireland to give their fancied opponents, Pakistan a run for their money. If not for a timely knock of 81 by Kamran Akmal, Joyce’s gut-busting hundred could have very well turned out to be a match-winning innings.

For a keen cricket observer, it is interesting to note how so many cricketers from Ireland seriously look at playing for England. To some extent, one can understand why innumerable Irish players switch their allegiance, as finally every professional cricketer yearns to play Test cricket and look at it as the ultimate challenge in the world of cricket.

It does tend to throw up some interesting situations. For instance, in the 2007 ICC World Cup, the well-built fast bowler, Boyd Rankin, while playing for Ireland bowled to Joyce, who was playing for England at that time. In the recently concluded one-off ODI played between Ireland and England at Belfast, the now English qualified, Rankin was bowling to Joyce who these days is back playing for Ireland.

Since 2008, Joyce has also moved from Middlesex to Sussex in County cricket. Compared to Joyce’s superlative performances for Middlesex, early in his career, he has been a trifle inconsistent for Sussex. Having said that, this year in First-Class cricket, Joyce at the age of 35, amassed 1,042 runs at a highly impressive average of 61.29.

Joyce’s double-hundred this season against a formidable foe like Nottinghamshire, showcases that he still hasn’t lost his uncanny ability to caress the ball into gaps with utmost ease and send the crowd into a tizzy.

If not for anything else, Sussex’ fans would vividly remember, Joyce for the unique fashion in which he was dismissed in a County game during the 2009 season.

In a 2009 Championship game against Warwickshire, he swept a ball from left-arm spinner Ant Botha with intent straight into short-leg fielder — Jonathan Trott‘s pocket. On expected lines, instinctively, Trott had turned his back and tried to leap out of the way of the ball, only to be stunned to find the ball lodged in his right pocket.

Joyce clearly hails from a family of rich sporting heritage. Both his brothers, Gus (Augustine) and Dominick have also played for Ireland’s men’s team. Joyce’s twin sisters, Isobel and Cecelia, have represented the women’s team in the past decade.

To make it even more remarkable, his mother, Maureen, was the official scorer for two women’s ODI matches against New Zealand in the year 2002. Another of his elder brothers, John, is a former national Under-19 chess champion and has gone onto become a successful chess player.

Joyce’s much-hyped comeback into the Irish setup is no doubt a boon to Irish cricket. His invaluable experience should help in grooming the younger lot to survive the tough grind of world cricket.

Sadly though, Joyce’s ambition of playing Test cricket and explore the outer limits of his game, may never be fulfilled. But on that unforgettable day at Sydney against Australia with a vivid brush, the free-flowing expressionist painter, painted the picturesque ground with shots of the purest silk.