Rohit Sharma brought India back into the Test, taking a backseat with Virat Kohli and dominating a stand of over a hundred with Wriddhiman Saha.

Eyebrows were raised when Rohit Sharma was picked ahead of Cheteshwar Pujara in West Indies. Pujara bats slowly, said the Indian management, Rohit can change the match in a session. The fans were not impressed: strike rate is hardly relevant in Test cricket, they opined. The indecision continued to the extent that Virat Kohli discarded his five-bowler policy to accommodate both men in consecutive Tests at North Sound and Kanpur. Anil Kumble mentioned that he had a talk with Pujara, requesting him to score runs at a faster pace. Fans were impatient, for they wanted Rohit to deliver or get dropped. Full Cricket Scorecard, India Vs New Zealand 2nd Test at Kolkata

There were speculations ahead of the Eden Gardens Test as well, but that had more to do with Murali Vijay s partner. The arguments subsided for a while, for even his biggest critics and the most vicious social media trolls agreed that Rohit had to be in at Eden Gardens. The ground and the man share a relationship that is nothing less than inexplicably fascinating. Like Mohammad Azharuddin and VVS Laxman, there is no reason why Rohit dominates Eden Gardens but he does. ALSO READ – India vs New Zealand 2nd Test Day 3: Highlights

Rohit came into the Test with a brisk unbeaten third-innings 68. India were looking for a quick declaration, and Rohit provided with that impetus. It was not a performance under pressure. He had at most semi-earned his place for the Eden Gardens Test.

The focus, of course, had shifted from Rohit to Shikhar Dhawan, more after he tried to cut one in the first innings and chopped on. They crowd booed him, cheering for Gautam Gambhir, for not only had Gambhir been left out, he had also led the local franchise to two IPL titles. Parity was restored when Gambhir dropped an easy catch in the New Zealand innings.

But we are drifting. The New Zealanders, especially the fast bowlers, gave the Indians a torrid time on Day One. Pujara fell for 87, his third fifty in as many innings, amidst groans from a sparse Eden Gardens crowd. Rohit was cheered, but he got a lifter from Jeetan Patel that he fended to short-leg. He had scored a mere 2.

Was this the end of the road, at least for a while? The next Test, of course, is at Indore, so he could not play the Eden Gardens card anymore.

Rohit had to walk out before he would have liked, or even expected to. Ajinkya Rahane, often labelled as India s man for all conditions, had gone below a bouncer from Matt Henry and had ended up lofting it to long-leg. Rahane was Henry s third wicket. At the other end Trent Boult had only one wicket against his name, but had probably bowled with more venom.

India were 43 for 4. That was the bad news. The good news was that Rohit had Kohli at the other end. Despite his ordinary form of late, they all India, New Zealanders, others were all aware that Kohli could change a Test on its head.

Rohit began tentatively. Rahane and Kohli had crossed over. Henry bowled one short of good length that kept lower than Rohit had expected. He was probably caught in two minds but adjusted the stroke late, flicking it for two. That was the first ball he faced.

For some reason, neither Boult nor Henry got that extra over. Ross Taylor had not rotated his fast bowlers, making Boult and Henry bowl in tandem for 7 overs each instead of introducing Neil Wagner early to keep at least one fast bowler fresh at any point of time. Worse, he got Patel on ahead of the significantly better Mitchell Santner, the only reason for which could be the fact that Patel had already dismissed Rohit once.

This was no Boult. This was no Henry. This was an innocuous off-spinner with little claim to fame in Test cricket bowling his first over with a semi-new ball. Survival and letting Kohli do the scoring was an option, but India needed the runs, and there would be no easier target today.

The slog-sweep for six was inevitable. You could almost sense the surge of adrenaline. There could be another attempt but why bother when Kohli is getting them? Get them in singles

Rohit was on 14 when Kohli fell for an outrageous 45. He added another 5 before Ravichandran Ashwin walked back. Seldom has a Rohit Sharma existence at the wicket been this eventful. At tea India were 110 for 6 with a lead of 222. India probably still had the upper hand, but they needed another boost.

There was a momentary lapse of concentration when a shot off Boult landed just past mid-off. So Rohit was there all this while? I thought Wriddhiman Saha was batting alone

Mid-off was pushed back. Rohit pushed one for a single. Was the hoick over the fielder earlier that over intentional? Maybe

Then, after remaining near-invisible for what seemed like a lifetime, Rohit hooked guided a bouncer from Boult behind square-leg, past the fence; and Eden Gardens came to life: this was more like it

The next ball was short as well, short and rising, on off; Rohit punched it furiously, but Santner flung himself at deep third-man to cut that four off.

But the shackles had been broken. It had taken him time, but Rohit decided that it was time to take charge. There was little but brute force in that extra-cover drive off Wagner. They gave him two gullies, but Rohit placed one between them to the fence.

Boult and Henry had had their fills. Taylor had been made to pay for his strategic errors, and would have to pay more. A casual drive-flick for four took Rohit to his fifty. Yes, Patel was back.

Rohit decided to continue. Santner tossed one up. Rohit had already eyed the massive gap on off. The ball was away from Rohit for that shot, but he backed his tremendous strength. The ball flew in the air but made it to the fence. He did the same off Patel the next over, but with more control.

Taylor continued with Patel and a tired Wagner. Following the bursts of rain Eden Gardens was basked in sunshine. The October humidity was probably acceptable for Indians, but the fast men from New Zealand were not at their best after stretching themselves beyond limit earlier that day.

It was Patel, and Rohit responded. Once again he backed those shoulders and arms. He was in no control over that slog-sweep, but there was no fielder at deep square-leg. The next ball met with an execution that was more authentic, powerful, controlled: the result was the same. And Santner was played deftly to the third-man fence.

And then, just as the huge coliseum in the ground that once used to be the second capital of the British Empire anticipated another hundred, the man who had dominated Sachin Tendulkar s 199th Test at the same ground, departed just like that: caught in two minds against Santner he played awkwardly, edging one to the gauntlets waiting behind him. And he walked back.

He had brought India back into the Test, taking a backseat with Kohli and dominating a stand of over a hundred with Saha. His 82 34 of which came in ones and twos had come at a strike rate of 62.

Has he silenced his critics? No.

Has he cemented his place? No.

Will he be a certainty if Kohli goes back to five bowlers? No.

Has he played an outstanding innings, yet again, enthralling the Kolkata crowd with relief at every passing moment of near-invisible existence at the crease before erupting in an array of strokes, combining elegance, application, and power at the same time? Oh yes.

And Eden Gardens will certainly savour the occasion. 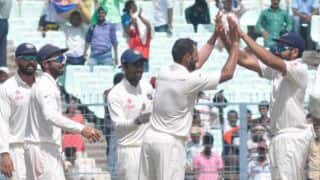 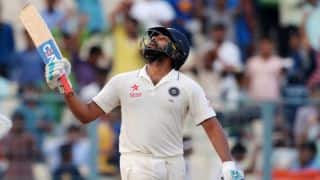