From Vijay Merchant to Rahul Dravid, Oval has witnessed the finest of India on English soil.

India get set to play the fifth and final Test against England at The Oval — a venue where they have a solitary victory in 11 Tests. Despite the fact that India haven’t recorded too many victories there, they have enjoyed some memorable moments. Nishad Pai Vaidya revisits some of India’s best performances in Tests at The Oval.

In the 11 Tests that India have played at The Oval, they have only managed to win one and have been beaten thrice. Though they have only the solitary victory to show, India have enjoyed some great moments at The Oval, with some fantastic knocks being scripted by their batsmen. As India prepare for the fifth and final Test against England at The Oval, let us revisit some of the most memorable performances from India in the past.

The Nawab of Pataudi’s Indian team had lost the first Test at Lord’s and had drawn the second at Manchester. This was India’s first tour to England in ten years and they had the same opening pair in Vijay Merchant and S Mushtaq Ali. India won the toss and chose to bat and were led by the opening pair, which added 94. Out of those 94, Mushtaq Ali had scored 59. Merchant had just about warmed up and then anchored the innings with wickets falling at regular intervals at the other end. He went on to score 128 and was the seventh batsman out with the score on 272. India scored 331 and England could only put up 95 before the match was affected by rain.

It was a summer where India rarely enjoyed a happy moment as they were whitewashed 5-0. However, in the fifth Test at Lord’s, Surendranath did give the beleaguered tourists a moment to cheer. After India were bowled out for a paltry 140, England went on to score 361 with two batsmen getting 90s. Surendranath toiled hard for 51.3 overs and took five for 75. His wickets included the likes of Colin Cowdrey and Ted Dexter. India were then bowled out for 194 in the second innings to hand England an easy innings victory.

It was the watershed year of Indian cricket. Having beaten West Indies on their own turf, Ajit Wadekar’s Indians landed in England with some confidence. After managing to draw the first two Tests, the focus shifted to the third one at The Oval. England batted first and scored 355. In reply, India scored only 284 with Ray Illingworth taking a five-for. However, it was then that BS Chandrasekhar unleashed his magic on the Englishmen. He was lethal through his fast paced spin and shot England out for 101, finishing with figures of six for 38. India then batted patiently for 101 overs to overhaul the target of 173 to create history — winning their first Test series in England.

Chasing a mammoth 438 with a little over a day to go, Sunil Gavaskar scripted one of his greatest epics. In company with Chetan Chauhan, he stitched together a stand worth 213 and then continued to pile the pressure with Dilip Vengsarkar at the other end. Gavaskar moved past his double ton and at 336 for two, it looked like it was India’s game. However, once Vengsarkar fell, it opened the floodgates. The plan to promote the hard-hitting Kapil Dev did not work. Gavaskar himself fell with the score on 389. Thereafter, India managed to hold on to a draw with only two wickets in hand. They came within nine runs of the target.

India came into the final Test of the series with some confidence after the 17-year-old Sachin Tendulkar smashed a ton to save the game at Manchester. They were trailing 0-1 in the series after the Graham Gooch-dominated Lord’s Test. At The Oval, India nearly turned the tables around. In the first innings, they smashed 606 runs. Ravi Shastri hit 187 and Kapil smashed 110 off only 142 balls. Manoj Prabhakar then led the way as India bowled England all out for 340 and then imposed the follow on. However, David Gower’s resolute 157 kept India at bay and earned a draw.

This was a new Indian team under the leadership of Sourav Ganguly. The series was level at 1-1 with India winning the previous Test at Headingley. Tendulkar became the then youngest player to play 100 Tests. England batted first and piled 515 with Michael Vaughan leading the way with 195. In reply, Rahul Dravid carried on from where he left at Headingley, to score a ton in three consecutive Test innings. While the knock at Headingley was about battling the conditions, this one was more about anchoring the innings with the others playing strokeful cameos. Tendulkar scored a fifty in his hundredth Test but could not make it big. Dravid was ultimately run-out for 217, an innings that lasted more than 10 hours. India conceded a slender seven-run lead, but with the last day’s lay being washed out, the series was shared. A major highlight of this Test was Sanjay Bangar’s act of opening the batting and the bowling.

It was a bizarre summer as the none of the frontline Indian batsmen got tons. While all of them contributed with crucial fifties, none of them went on to make three figures. Though the surface at The Oval, the scene of the third and final Test, was a batting beauty, no one would have expected Anil Kumble to get a ton. Tendulkar had been dismissed in the 80s, Dhoni got a cracking 90-odd. But Kumble battled on and got to his first Test century. That took India to 664. England were bowled out for 345, but India did not enforce the follow-on and left England with a target of 500. Though they managed to draw the game, India clinched the series 1-0, with that lone victory coming in the second Test at Nottingham.

8.  2011: Rahul Dravid carries his bat through the innings

To say that India had a disastrous tour to England in 2011 would be an understatement. However, Dravid stood tall with some solid displays and was perhaps the only saving grace in a 0-4 rout by England. Dravid rose to the occasion when his team needed him the most. After England smashed 591, Dravid had to open the batting as Gautam Gambhir had a concussion while fielding. With wickets falling like nine-pins, Dravid held firm and led the way with an unbeaten 146 to carry his bat through the innings. It was due to that effort that India scored 300 for the first time in the series. However, that wasn’t enough as India followed on and lost by an innings and eight runs. 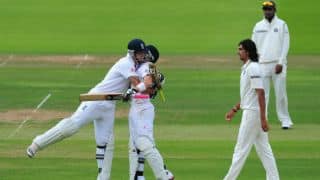