England successfully negated three spinners in the first innings at Rajkot while the pitch remained friendly to batsmen, but how will they fare on tracks offering more turn?

The two enduring stereotypes concerning England tours to the subcontinent are that their batsmen are perennially poor at facing spin, and their bowlers equally poor at purveying it. They successfully negated three spinners in the first innings at Rajkot while the pitch remained friendly to batsmen, but how will they fare on tracks offering more turn? Michael Jones examines their past performances, and assesses their chances in the remainder of this series. Full Cricket Scorecard: India vs England 1st Test at Rajkot

A glance at the series averages is sufficient to show how Bangladesh fell agonisingly short in the first Test against England, before winning the second comprehensively. Ben Stokes was head and shoulders above any other seamer on either side, with 11 wickets at an average of just 10.09 without his contribution England would almost certainly have lost 2-0 but among spinners it was a different story.

Mehedi Hasan Miraz and Shakib Al Hasan wrought havoc for the hosts, while among the quartet England tried, only Moeen Ali made any significant impact. The figures returned by Gareth Batty and Adil Rashid might have been considered respectable in other circumstances, but not in the context of a series in which neither team reached 300 in 8 attempts, while Zafar Ansari s 2 wickets for 112 would be nothing to write home about on any surface.

This is no more than the latest series to follow the same trend. Whenever England have visited the subcontinent (or Pakistan s current home in UAE), the home team s spinners have looked forward to wickets in abundance. With a few exceptions Harbhajan Singh and Danish Kaneria fared relatively poorly, while Ravichandran Ashwin was in the early stages of his career in his only previous home series against England and will expect to improve his figures this time around they have run through English line-ups on a regular basis.

The equivalent list for English spinners over the same period makes a stark contrast. While six home spinners have averaged under 20 against them, only two of the visitors Graeme Swann and Robert Croft have managed under 30, and in the latter case only over a single series.

Ashley Giles, Monty Panesar and Moeen have been ordinary, the others worse than that. Shaun Udal helped England to victory at Mumbai in 2005-06 with second-innings figures of 4 for 14 including the key wicket of Sachin Tendulkar which only serve to make his overall statistics slightly less embarrassing: those 4 wickets were half of his Test career aggregate, after the other 4, spread over 7 innings, had come at an average of 82.50.

Given this disparity, it may be somewhat surprising that England have won a Test series in every one of the subcontinental nations this century. When they chased down a target in the Karachi gloom in 2000 sealing a series win thanks to draws in the first two Tests the main spinners on each side were neck and neck: Saqlain Mushtaq took 18 wickets in the series, Giles 17, at almost identical averages, while the other spinners contributed little; Kaneria and Shahid Afridi contributed only 4 wickets each, Mushtaq Ahmed was dropped after figures of 1 for 164, Ian Salisbury retained despite only taking 1 wicket all series; it proved to be the end of his Test career, which left him with the unwanted record of the worst Test bowling average for anyone with 20 or more wickets.

With their succession of world-class fast bowlers, Pakistan have historically been less reliant on spin than India or Sri Lanka, but it was in that department that England took the advantage: Waqar Younis had been omitted from the first 2 Tests in order to accommodate three spinners, and was brought in for the third after Wasim Akram withdrew, citing a back spasm thought in some quarters to be an excuse manufactured to save face when he was on the verge of being dropped anyway. Waqar excelled in the one match he did play, but could not compensate for the poor returns of Wasim and Abdul Razzaq, and they were out-bowled by Darren Gough and Craig White.

After the retirements of Wasim, Waqar and Shoaib Akhtar, and their move to their second home in the UAE, Pakistan once again became more reliant on spin than pace. When England played a 3-Test series there in 2011-12, the visitors had the edge in the pace department Stuart Broad and Umar Gul both had excellent series, but where Broad had James Anderson as back-up, the home team s only other frontline seamer, Aizaz Cheema, was poor but the primary reason for Pakistan s whitewash was their superiority in spin. Panesar and Swann did not perform badly in the series, but Saeed Ajmal and Rehman swept all before them.

Immediately after their series victory in Pakistan, England moved on to Sri Lanka, where they went down by an innings in the first Test but came back to win the next two and put the seal on a remarkable winter.

It was only the third time ever they had won two away series in the same season, and they have yet to repeat the feat since (in both 1954-55 and 1970-71 they followed a successful Ashes tour with another series win in New Zealand), although the victory was marred by poor umpiring from Peter Manuel and AV Jayaprakash, and, most notoriously, BC Cooray in the second.

One heavy defeat followed by two narrow victories enabled the tourists to snatch the overall win despite being comprehensively out-bowled over the series as a whole: for once Muttiah Muralitharan fell short of the success he usually enjoyed against England, but Sanath Jayasuriya and Chaminda Vaas stepped up to fill the gap, with 16 wickets each at averages either side of 15.

Gough led the England attack, with some support from Caddick; spin played little part in the series win. Giles, after making a crucial contribution to the victory in Pakistan, was poor in Sri Lanka; the addition of Croft to the team, after he had declined to tour Pakistan due to security concerns, enabled England to drop Salisbury for good, but Croft only partially filled the gap left by Giles s underperformance.

The win was followed by a 0-1 defeat in their next tour to Sri Lanka in 2003-04, which could easily have been 0-3: England held on for draws 9 wickets down in the fourth innings of the first match and 7 in the second, before the home team finally stamped their authority on the series with a massive innings-and-215-run victory in the third.

Once again they were both out-seamed and out-spun: Vaas s 13 wickets at 21 apiece were superior to anything England s pace attack managed, and while Giles s return of 18 at a fraction under 30 was a significant improvement on his previous visit to the island, Murali was at his devastating best with 26 at an average of just 12.30.

Another 0-1 defeat followed in 2007-08, when the margin again flattered the tourists as they had had much the worse of the two draws; once again Murali and Vaas comfortably outperformed any of England s attack.

In 2011-12, after a pasting from Pakistan, they salvaged some pride with a 1-1 draw in Sri Lanka their first Test victory there in twelve years. The home team s best spinner and best seamer had both retired, and although Rangana Herath s 19 wickets at 17.94 in the 2-Test series made him a worthy successor to Murali, there was no-one to replace Vaas, and the combination of Swann (16 wickets at 22.18) and Anderson (9 at 21.77) gave them a share of the honours.

England s nadir in India and the series which first established the stereotype of their helplessness against subcontinental spin, since in previous decades their record there had been relatively respectable came in 1992-93; the same tour is also remembered for Graeme Gooch and Mike Gatting falling ill, allegedly after eating some dodgy prawns (although an alternative version of the story suggested that it was a plate of pork, not the prawns, which was responsible).

Keith Fletcher, the England coach, confidently declared before the series that he had seen Anil Kumble bowl and did not expect the batsmen to have too many problems against him; Kumble proceeded to take 21 wickets in the series. The returns of Venkatapathy Raju and Rajesh Chauhan were far from outstanding, but they still comfortably outshone their English counterparts.

The visitors started the series with only one specialist spinner in the team Salisbury, who had started his Test career against Pakistan the previous summer with a relatively promising 5 wickets on debut, although figures of nought for 184 in the next match provided the first hint of how the remainder of his career would unfold. He proved ineffective in the first match, so Phil Tufnell was added for the second; Salisbury was then dropped for the third and Tufnell joined by John Emburey, but neither of them did any better, as England lost one match by 8 wickets and the other two by an innings. Their leading bowler in the series was Graeme Hick (who finished with more Test wickets than Salisbury, at a significantly better average).

England s last tour to India brought them their first series win there in a generation, and it isn t difficult to identify the main reason for it: just for once, they had a stronger spin attack than the hosts.

Swann was England s best spinner since Derek Underwood, while Panesar, though inconsistent, could be devastating on his day (Samit Patel was also tried, and only took one wicket in the series).

Kumble had retired, so India s spin line-up was led by Pragyan Ojha, who carried the attack when none of his teammates proved up to the task. Ashwin was still new to Test cricket and yet to reach his best, while Harbhajan, Piyush Chawla and Ravindra Jadeja only played one Test each. They were taught exactly the same lesson which Bangladesh gave to England this time: that having two spinners who perform well in a squad is better than three or four who don t.

The stark contrast between the performance of India s spin attack in that series and that of Pakistan s a year earlier is reflected in how the same batsmen who had floundered against Ajmal and Rehman in UAE went on to flourish against Ojha, Ashwin et al.:

What has changed since 2012-13? Swann has retired, while Panesar s disciplinary problems, eventually identified as a result of mental illness, have seen him fade from the reckoning. In their place are Moeen, with a Test bowling average only just the right side of 40; Rashid, who took a 5-wicket haul in the second innings of his debut but has made little impression since; Batty, who failed to justify his surprise recall to the squad; and Ansari, who leaked runs on debut and only had 2 wickets to show for it.

For India, the Test careers of Harbhajan and Ojha appear to be over, but the last four years have seen Ashwin rise from raw international newcomer to the best spinner in the world, while Jadeja largely ineffective overseas has proved deadly in home conditions. England s top-order succeeded in blunting them for the first innings of the series on a surface offering no help, but history casts doubts on their ability to do so on a consistent basis when the pitches start to wear. 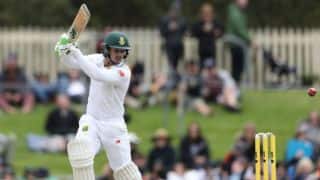