Cook’s character will be judged if he decides to stay on as captain.

After England was whitewashed by Australia in the Ashes 2013-14, Alastair Cook gave a positive feedback and showed that he was not interested in throwing the towel. Rather he was ready to lead the team out of the poor series. Fast forward, England lost the first three One-Day Internationals (ODIs) and also the series against Australia. There are still two matches remaining. A distraught Cook accepted in the post-match conference that he has been struggling and there are chances that he might step down as the captain of the side. But, will that be a good move?

At this point there are very few options before the English selectors to replace Cook as captain. Stuart Broad, who is the Twenty20 (T20) captain, stands chance of replacing the England opener. However, will England and Wales Cricket Board (ECB) like to elevate a key bowler as captain who needs to be rested from time to time? Also, Broad’s aggressiveness may go against him.

The other options are Ian Bell and Eoin Morgan. Michael Vaughan, however, gives some compelling reasons why Bell and Morgan might not be good replacements. The former England captain opined that though Bell has been the vice-captain of the side when Matt Prior was dropped, England needs to focus on his batting skills more than expecting him to take up leadership roles. There is school of thought that Bell isn’t mentally tough to be a leader.

Morgan can easily replace Cook in the ODI format, but if that is the case Broad will be a better choice. Then again, the question of multiple captains for different formats crops up. Plus, Morgan doesn’t play Tests.

Eight consecutive eight defeats may have demoralised Cook just a bit too much, but he needs to stay positive and take the loss in his stride. Cook should remember that one bad series doesn’t count much in front of the all the good performances England has produced in the last one year.

England have not risked pushing youngsters (both in terms of age or experience) to the task. It had clicked with Adam Hollioake in the Sharjah tournament in 1997-98 but they’re usually too rigid.

Unquestionably, England’s defeats have come as a huge blow to Cook, but then just about every visiting team has struggled in overseas conditions. There is no need to press the panic button yet for England. They can take heart from the fact that Australia themselves bounced back in quick time after being outplayed in England.

Cook’s character will be judged if he decides to stay on, takes responsibilities and helps the board reshape the team. He would certainly not like to be seen as a quitter.

The ECB don’t really have much choice if Cook resigns.  The board needs to take swift decisions to prevent from him from taking that step by talking to him and assuring him that they continue to have faith in his leadership.

Like Vaughan said, Cook should remember that it was not his own failure that resulted in the loss. After all cricket is a team game. 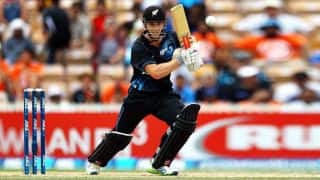