James Anderson was ruled out of the fourth Test due to side strain.

James Anderson’s fitness boost just a couple of days ahead of the fifth Test of Ashes 2015 is a major boost for England. Anderson has had a mixed series so far. After going wicketless at Lord’s he was back to his best at Edgbaston. Anderson and Stuart Broad have formed a formidable partnership with the ball for some time now, and have been two of England’s best bowlers with the new ball. Pramod Ananth reckons it would be impractical if Anderson does not feature in the fifth Ashes Test.

England may have wrapped up the series already. Broad’s freakish 8 for 15 at Trent Bridge ensured Anderson was not missed at all. Despite this, it is paramount that Anderson must play at The Oval, provided he is fully fit. A team must at any circumstances play its best players and in England’s case Anderson is the best bowler they have at their disposal.

Anderson is England’s leading wicket-taker, and one of the best bowlers around.  While pairs are necessary while batting, they often form equally, if not more, crucial while bowling. How often have we seen a bowler maintaining pressure on the opposition, only to see the man at the other end leaking runs at the other end to give it away? READ: Ashes 2015: Alastair Cook urges England to pile more misery for Australia in final Test

This is where Broad and Anderson have been outstanding as a pair. Both men have got most of their wickets while bowling in tandem, and this is a partnership that England must not look to break.

Anderson, 33, sustained a side strain during the third Test at Edgbaston, which forced him out of the fourth at Trent Bridge. Although it is not clear how well he has recovered going into the final Test, he was seen practicing. However, England will take a call at the last minute regarding his inclusion. Mark Wood, who replaced him at Trent Bridge, is most likely to make way for Anderson, despite a good performance. Steven Finn has been a revelation since he made a comeback and is most likely to keep his place. READ: Ashes 2015: James Anderson’s return to 5th Test gets boost following return to practice session

Of course, England may also look to drop Wood for Adil Rashid if Anderson is not fit, for The Oval has traditionally helped spinners. Along with Moeen Ali, Rashid may turn out to be more than a handful, what with Joe Root chipping in with the occasional short spell.

Anderson has a good record at The Oval, scalping 35 wickets from 10 Tests. England will bank on him getting a few more against Australia. This England side will not be complacent going into this Test despite having regained the urn. They will want to pile on the misery on the Australians, who have major issues with the performances of few of their players. A 4-1 scoreline looks much more comprehensive than 3-2 (or even 3-1). Anderson’s inclusion may take England one step closer in achieving that; a perfect way to avenge the 0-5 thrashing Down Under. READ: James Anderson shows pace and bounce is not the only way to take wickets in the Ashes 2015 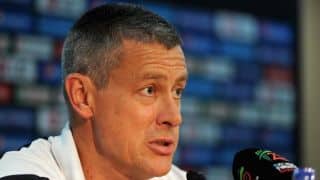 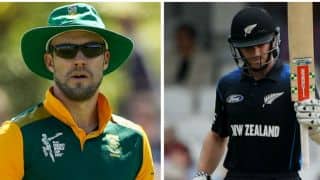 POLL: Will Kane Williamson be a better ODI captain than AB de Villiers in the upcoming 3-match series?