Eoin Morgan and Ben Stokes took England out of the woods and added 159 runs for the fourth wicket, gifting the hosts a comprehensive win.

Curtains are down on Australia‘s campaign in ICC Champions Trophy 2017. Ben Stokes‘ marvellous 102* in a 278-run chase powered England to a 40-run win (DLS method). In yet another rain-affected match, Australia were in the driver’s seat when they dismissed England’s top three batsmen for a mere 35 runs in 5.4 overs. However, Eoin Morgan and Stokes took England out of the woods and added 159 runs for the fourth wicket, gifting the hosts a comprehensive win. Stokes was adjudged Man of the Match for his all-round performance. And with this win, England take Bangladesh to the semi-finals. That and other top episodes in today’s highlights. Full cricket score: England vs Australia, Champions Trophy 2017, Match 10 at Edgbaston

Clueless England pacers: The track did not have enough bounce, but the dark clouds looming over and moisture in the air helped pacers generate lateral movement. Despite bowling full and straight, the English bowlers were on the shorter side in the first 15 overs. In fact, David Warner, the only wicket that fell in that phase, was dismissed off a length ball.

Finch goes full throttle: Aaron Finch had a rough start. A few balls beat the outside edge off his thick bat. However, he stuck to his natural game, taking the bull by its horn. It was his counterattack that laid foundation for Australia. He plundered 68 off 64, including 8 fours.

Smith continues being Smith: Steven Smith had scored unbeaten 8 and 22 in Australia’s previous washed-out games. Before that, he was remarkable in IPL 10. In fact, Smith has not been out of sorts for that past few years. When Australia lost Warner, Smith played second fiddle to Finch. In the process, he collected 56 off 77. It was just another day for the talismanic Australian.

Rashid spins momentum England’s way: Adil Rashid is England’s dark horse. Seldom does an opposition treat him as a potential threat, and the very fact works in his favour. With his leg-spinners, Rashid took 4 for 41, prominently dominating the lower-middle order.

Touchwood, Mark: England were outstanding in the death overs. At one stage, it seemed Australia would surpass 300. However, Mark Wood applied his pace-bowling sensibly just when Australia decided to go great guns. Before that, he had got the better of Warner and Steven Smith, the big fishes in the pond. In the 43rd over, he had the dangerous Glenn Maxwell caught at deep mid-wicket, courtesy Jason Roy’s brilliance. He finished with figures of 4 for 33.

Travis keeps a cool head: When wickets were cascading at one end, Travis Head showed resilience despite playing aggressive brand of cricket. He remained unbeaten on 71 off 64, smashing 5 fours and 2 sixes. Had he succumbed to pressure, Australia would have started down the barrel and posted a less competitive total.

Starc, Hazlewood put England in trouble: England lost both openers in 1.2 overs. Mitchell Starc caught Jason Roy in front, while Josh Hazlewood had Alex Hales caught in the slip cordon. All hopes were pinned on No. 3 Joe Root and captain Eoin Morgan.

Root played two lovely fours before he edged one behind the wicket, giving Hazlewood his second scalp.

Morgan, Stokes rescue England: The scorecard read 35 for 3 in 5.4 overs when Stokes took the crease. And just when Australia looked in control, the dark, gloomy clouds could not hold on. A slight drizzle paused the game for a while.

After the run interruption, Morgan wasted no time and launched a counterattack. Back-to-back boundaries off Starc was evidence to the fact that Morgan wanted to be ahead in the DLS method. Stokes, from the the other end, joined his captain in demolition.

It was a reminiscence of Shakib Al Hasan and Mahmadullah’s partnership from last night. Both Morgan and Stokes were going at a similar rate. However, Adam Zampa’s direct hit had Morgan short of crease for 81-ball 87.

Stokes, the rising star: Stokes continued his rampage. England needed 84 off 103. His job was not done yet. In came Jos Buttler to help Stokes take England to a comprehensive win. Though Stokes slowed down, his vigour did not fade away one bit. He reached his maiden hundred in an ICC tournament off 108 balls. 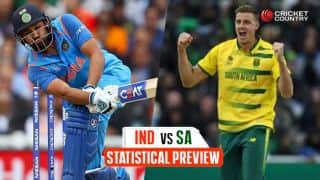