Younis Khan slammed his sixth double hundred during fourth Test between England and Pakistan at The Oval.

Much was expected from Younis Khan when he came into bat on Day Three because he seemed like the only one who could give Pakistan a huge lead over the hosts. Standing true to the responsibilities entrusted on his shoulders, Younis delivered one of the best knocks of his career and completed his 6th double-hundred. He displayed a fine example, lead the Pakistan’s charge and got all his experience together to take them to a lead of 214 runs. This Test is probably the last time Younis would be playing in England and the veteran player made sure that he made his innings count and a memorable one. Full Cricket Scorecard, England vs Pakistan , 4th Test match

Pakistan had all the more reasons to smile as after Younis departed; it was expected that the tail would wind up soon. Mohammad Aamer turned out to surprise everyone as he took on England’s best bowlers playing some delightful strokes down the ground. Aamer remained unbeaten on 39 off 71 balls which included five boundaries and a huge six. His innings was very crucial as it added on some valuable runs to Pakistan’s lead. ALSO READ: Joe Root crosses 4,000 Test runs

Pakistan carried their good form of the earlier two sessions in the last session as well. Aamer, Sohail Khan and Wahab Riaz bowled in very tight overs initially giving very little room to the England openers to open their arms. Things were looking very tight for the hosts as they could only muster 9 runs in the first nine overs. England were dealt with  amajor blow when they lost their captain Alastair Cook to a very good delivery from Wahab. Joe Root and Alex Hales tried to settle things down for England as Root played an attacking innings. ALSO READ:Day 3 report: Yasir Shah’s 3-for puts Pakistan in command against England

But soon the bowling change worked for Pakistan with the introduction of Yasir Shah. Yasir got both turn and bounce from the wicket, which changed the course and balance of the game. Yasir got rid of Hales first and then James Vince in a matter of just 10 balls. His bowling worked wonders for the visitors as he then sent England’s in-form batsman Joe Root back for 39. England were reeling at 74-4. Gary Ballance and Jonny Bairstow were at the crease at stumps, trying to save England from an innings defeat.

So far the match is nicely poised and it looks like Pakistan might seal a victory on their Independence Day if they wrap the England middle-order cheaply on Day Four. The first session will hold key for both the teams. 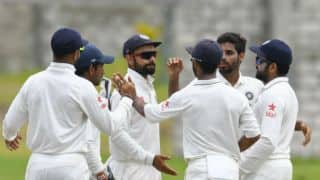 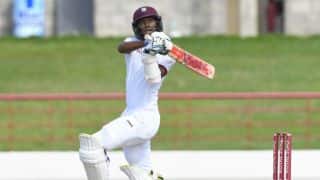