After a surfeit of Twenty20 (T20) cricket, Test cricket makes a quiet return as hosts England take on Sri Lanka in the first Test.

After a surfeit of T20 cricket, Test cricket makes a quiet return as hosts England take on Sri Lanka in the first match of the three-Test series at Headingley on Thursday. It is close to three months since the last Test was played, when Australia toured New Zealand for Brendon McCullum’s farewell series. Since then, T20 cricket has been all over the place. These two teams share a relatively brief-yet-exciting Test history, right from the very first Test between them in 1981-82 to the most recent one in 2014, which was a cliff-hanger. It was Angelo Mathews’ career-best 160 and Dhammika Prasad’s 5-50 that set up a penultimate ball win for Sri Lanka in that game. Over the past 35 years’ history between the two teams, there have been more such performances. Let’s take a look at 12 such performances here: LIVE CRICKET SCORECARD & BALL-BY-BALL COMMENTARY: England vs Sri Lanka 2016, 1st Test at Leeds, Day 1

1.  Sidath Wettimuny’s 11-hour 190, Lord’s, 1984: This was Sri Lanka’s first-ever Test appearance at the home of cricket. This was also Aravinda de Silva’s debut Test, but this match was not about him. Opener Wettimuny, the third international cricketer in the family, made the English bowlers toil with his solid technique and watertight defence.

Batting first, it was his innings that laid a strong platform for the Sri Lankan dominance in the match. Wettimuny had vital partnerships with Arjuna Ranatunga and skipper Duleep Mendis during his marathon knock of 190, which came in 471 balls and well over 10 hours. Sri Lanka punched above their weight by scoring 491 and restricting England to 370. The match, which could not go into the fourth innings, was eventually a draw. It is also remembered for skipper Duleep Mendis’ first innings hundred and 94 in the second innings. ALSO READ: England (ENG) vs Sri Lanka (SL) 2016 Live Cricket Score, 1st Test, Day 1

2.  Muttiah Muralitharan’s 7 for 155 and 9 for 65, The Oval, 1998: England were coming into this match after an encouraging win over South Africa, but they had no idea what was in store for them. His then captain Ranatunga had referred to him as his only ‘real asset’; and Murali lived up to that reputation.

Batting first, John Crawley (156 not out) and Graeme Hick (107) negotiated the threat of the spin wizard quite well even as rest of the English batsmen surrendered, handing Murali figures of 7 for 155. Sri Lanka posted a mammoth 591 in reply to England’s first innings 445 and the match was nicely poised. But a second innings collapse saw England lose the game by 10 wickets. Once again, Murali was the chief architect with his 9 for 65. The only wicket that he did not get was a run-out.

3.  Sanath Jayasuriya’s 213, The Oval, 1998: Same match, another story. Sanath Jayasuriya’s contribution was as much significant as Murali’s in Sri Lanka’s win. Following England’s first-innings 445, it was his counter-attacking 213 that set up foundation of a huge total for the island nation.

His knock, one that included 33 hits to the fence and one over it, came at a strike rate of over 76, which proved crucial later on as Sri Lanka won the match in the final hour of the game on the last day. It was only befitting that he was at the crease when the Lankan win finally happened. If Murali was named Man of the Match, Jayasuriya won hearts.

4.  BC Cooray, Kandy, 2001: This has to be one of those rarest of rare instances where a cricketer does not find mention in the list of memorable performances. In that infamous Kandy Test, which was second of the three-Test series, an umpire took the centre-stage and influenced the outcome of not only the Test, but perhaps the series. BC Cooray, a veteran Sri-Lankan umpire with experience of officiating in 20 Tests made around 15 errors in the match (with some help from Rudi Koertzen). That potentially cost Sri Lanka — who had won the first Test by a thumping margin — the Test and the series.

Some of his howlers included crucially turning down three appeals against Nasser Hussain, who went on to make a match-winning hundred, Hick’s obvious return catch to Murali, and giving Jayasuriya out to a bump catch. There were protests from the fans and media while the players also vented out their frustration. This proved to be too much for Cooray to take as he retired soon after (he was also dumped by the ICC). England won the Test by 3 wickets and the final Test by 4 wickets to clinch the series 2-1. The furore led ICC to introduce its Elite panel of umpires the following year, with two independent umpires for Tests and one independent and one home umpire for ODIs.

5.  Graham Thorpe, 113 not out and 32 not out, Colombo, 2001: In the final Test of that infamous series, one man stood tall between Sri Lanka and victory. The Lankans tried everything in that low-scoring encounter to win the match and save themselves from the ignominy of losing the series after being 1-0, but Graham Thorpe thwarted all their efforts. His unbeaten 113 in the first innings helped England score 249 on a turning track and more importantly take a slender yet vital lead of eight runs. Even as Sri Lanka were bowled out for 81 in the second, they fought hard to defend the modest 74 run target and claimed six Englishmen, but Thorpe, with his 32 not out, masterminded the chase and set up a historic series win for England.

6.  Entire Sri Lankan batting order, Lord’s 2006: This match, though a draw, will always find special mention in England-Sri Lanka Test history. When England piled up 551 runs in the first innings and reduced the visitors to 192, everybody thought the match was well but over. But what transpired next was an amazing story of grit as the entire Sri Lankan batting unit stepped up to take the challenge of saving the match and successfully saved it.

On a dying pitch, the islanders survived 199 overs and three new balls to script a miraculous escape as every single player scored more than his effort in the first innings. Seven of them went past fifty, with Mahela Jayawardene (119), Chaminda Vaas (50 not out) and Nuwan Kulasekara (64) being the notable mentions.

7.  Muttiah Muralitharan 3 for 62 and 8 for 70, Trent Bridge, 2006: Another Murali show, as Sri Lanka won the match by 134 runs. Batting first, Sri Lanka scored 231 runs. A collective bowling effort, with Murali leading the pack with 3 wickets, restricted England to 229.

Sri Lanka improved their performance in the second innings and scored 322, highest in the match, and the final innings belonged to Murali once again. Though the first wicket stand of 84 raised English hopes, the spin wizard soon took control of the game and bundled out England for 190. He finished the second innings with figures of 8 for 70 and the game with 11 for 132.

Andrew Stauss’ smart declaration turned out to be a masterstroke as from here on, the script went horribly wrong for the Lankans, who were bundled out for 82, thus losing the match by an innings and 14 runs. Swann was the destructor-in-chief with match figures of 7 for 94 (including 4 for 16 in the second innings). What made the win special was the fact that England’s pace spearhead James Anderson did not take part in the second innings due to an injury.

9.  Mahela Jayawardene 180, Galle, 2012: Mahela’s 180 on a track where the second highest score in the Sri Lankan innings was 27 turned out to be the difference between the two teams. Riding on his magnificent ton, Lanka posted 318 on the board. England batsmen could never match his brilliance and surrendered in both the innings as Lanka completed a 75-run win.

10.  Rangana Herath 6 for 74 and 6 for 97, Galle, 2012: What Jayawardene did with bat, Herath did with ball. The two together punctured the English hopes in that match as Sri Lanka wrapped up a comfortable win in the end. Herath’s 6 for 74 in the first innings and 6 for 97 in the second were as important a contribution as Mahela’s hundred, but perhaps the fact that he clicked in both innings earned him the Man of the Match award.

11.  Graeme Swann 4 for 75 and 6 for 133, Colombo, 2012: Another Jayawardene gem (105) helped Sri Lanka put 275 on the board, but a Kevin Pietersen special (151, from 165 balls) on a turning track completely changed the course of the match, as England managed a massive 460 in the context of the game. Sri Lanka toiled hard but could better their first innings effort only by three runs as Swann proved too hot to handle. His 4 for 75 and 6 for 133 eventually paved way for a famous England win.

12.  Angelo Mathews 26, 4 for 44 and 160, Headingley, 2014: This has to be easily one of the greatest Tests being between England and Sri Lanka, if not the best. A team that was marred by natural calamities and lack of finances went on to win one of its most famous Tests overseas.

With the start Sri Lanka got in the match, no one would have thought they could win it. They managed 257 in the first innings (Mathews played a breezy cameo) and when England went past their first innings score with a 108-run lead, more people were convinced of a Lankan defeat.

Then captain Mathews too things in his hand and almost single-handedly elbowed-out England from the contest. His majestic knock of 160 helped Lanka post 457 and set England 350 to win. But Dhammika Prasad rose to the occasion with his fifer and Lanka went on to complete a memorable win off the penultimate ball of the match after Moeen Ali (108 not out) and James Anderson (with a 55-ball duck) threatened to take the match towards draw with a dour 81-minute stand. Aside from brilliant hundred, Mathews also took 4 for 44 in the first innings, and rightly earned the Man of the Match award. What Virat Kohli has done to drab IPL 2016 season 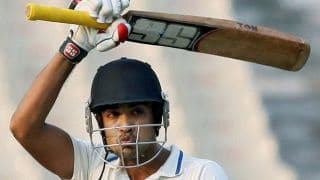