England and Sri Lanka blessed the cricketing world with a fantastic Test match at Lord's.

England and Sri Lanka blessed the cricketing world with a fantastic Test match to start what promises to be a very good series. The first Test at Lord’s saw a few tremendous centuries, some trying spells and a thrilling finish. Shiamak Unwalla looks at the moments that changed the game.

Joe Root’s tremendous double: Game of Thrones fans could be forgiven for calling him Joe of house Root, lord of Lord’s. Root scored his second consecutive score of 180 or above at Lord’s, thereby entering the record books at the Mecca of cricket. His unbeaten 200 came off just 298 balls and set up the match beautifully for England.

The Kumar Sangakkara and Angelo Mathews show: If there was one batsman Sri Lanka would have put their hopes on, it would have to be Kumar Sangakkara. The regal left-hander did not disappoint, as he went from strength to strength to end up scoring his first ever Test hundred at Lord’s. He was ultimately dismissed for a masterful 147, but all was not lost for the Lankans. Skipper Angelo Mathews was positive from ball one, and scored at almost a run-a-ball for his first 40-odd runs. He then buckled down to play an innings of great power and responsibility. His 102 came off 172 balls and helped Sri Lanka eat into the sizable England lead.

Shaminda Eranga’s bursts: It is rather difficult to recollect the last time a Sri Lankan pace bowler whose name was not Lasith Malinga had English batsmen hopping in their own backyard, but that is exactly what Shaminda Eranga did with his 10-over spell from hell. Bowling first change, Eranga reduced England from 46 for no loss to 69 for three. They were then gasping at 121 for six, which brings us to…

Gary Ballance’s sublime ton: In a match dominated by some excellent batting, Gary Ballance’s knock on Day Four could have proven to be the most important one of the match. England were in serious trouble of getting bundled out for a paltry total, which would have given the Lankans a real chance of chasing the target down, but Ballance played a sublime innings.

What stood out was his off-side play, as he struck as many as nine of his 12 fours between third man and cover. However, the fact that he got to his ton, was because of Alastair Cook’s charitable thinking. Which brings us to…

Alastair Cook’s late declaration: With around 10 overs to go for stumps on Day Four, England were 202 for seven, a comfortable 324 runs ahead. At this point, it would have made sense to declare and have a crack at the Lankan openers for close to 10 overs. However, with Ballance batting on 63 at the time, Cook decided against the declaration. Soon, Ballance was on his way to a maiden Test hundred. He finally got there with a six in the final over of the day, but already there were whispers that Cook — in allowing Ballance to get a hundred — sacrificed a position of strength for a mere milestone.

The Kaushal Silva-Sangakkara partnership: Sri Lanka needed to bat for three sessions to draw the match. It was really as simple as that and it was with this clear thought that Kaushal Silva and Sangakkara settled in to stitch together a 98-run alliance after Dimuth Karunaratne was dismissed early. England could take only two more wickets till tea, as Sangakkara held firm at one end.

The thrilling final session: The final session of the match saw excitement almost immediately. James Anderson, bowling the third over after tea, induced a slightly lazy shot from Sangakkara and had him bowled. Four balls later, Lahiru Thirimanne edged him to slip as Sri Lanka started unravelling. Sri Lanka were on 170 for five in 59 overs.

Mathews and Prasanna Jayawardene then buckled down for the next 20 overs, which saw them score merely 24 runs. Chis Jordan managed to get Prasanna Jayawardene out LBW, before Stuart Broad broke through with Nuwan Kulasekara’s wicket a few overs later. Now at 199 for seven, Sri Lanka needed to survive six overs with three wickets in hand. Anderson bowled the 87th over and got Mathews to edge one to Cook off the final ball. England now had three overs to get two wickets.

They were unsuccessful for the first two of those overs, till Broad sent the audience into a mad flurry by getting rid of Rangana Herath — who actually was not out, but walked anyway because he didn’t know the rules — off the first ball. Nuwan Pradeep was adjudged LBW off the fifth ball of the over, but the drama was to continue. DRS saw something the umpire had not and Pradeep survived to fight — and survive — another ball. Sri Lanka held England to a draw with just one wicket remaining and the internet exploded with “should have declared sooner” taunts. 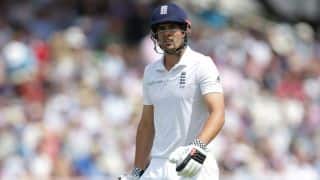 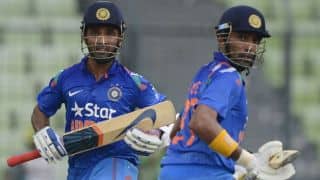