A look at some memorable Test matches played between England and Sri Lanka over the years.

England and Sri Lanka will begin their two-match Test series on June 12, 2014, at Lord’s. These sides have had some interesting battles in the five-day format before. Bharath Ramaraj looks back at some riveting contests that have taken place between England and Sri Lanka in Test cricket.

When you watch a national team playing England in the idyllic facade surrounding most English grounds, it makes you feel like it is a haven of peace and harmony. But if we scratch the surface, underneath, there have also been occasions when it has turned into a contest full of bubbling tensions. On June 12, 2014, with peace and tranquillity surrounding Lord’s ground, England will take on Sri Lanka.

So, let’s look at some of the edge-of-the-seat encounters that have taken place between the two countries in test cricket, over the years.

February 17, 1982, was a red letter day in the history of Sri Lankan cricket. It was the day when Sri Lanka played their first Test against England. Bandula Warnapura and Keith Fletcher were the respective captains. Warnapura, the Sri Lankan captain won the toss and elected to bat rather surprisingly on a track that had enough moisture in it for the seamers to feel at home. Even more surprising was the wiry quick, Rumesh Ratnayake not being picked.

Sri Lanka only made 218 in their first innings. The pace bowling pair of Ian Botham and Bob Willis picked up five wickets between them. It has to be remembered that was the time when Botham could do no wrong. Derek Underwood, playing in his last Test also enjoyed the conditions on view by taking a five-for. Arjuna Ranatunga, who was still in his school, played a tenacious knock. Ranjan Madugalle also showed his wares with a gritty half-century.

Ashantha de Mel produced a good spell to leave England in a spot of bother. It was David Gower, with his unlimited grace, who came to England’s rescue with a fine knock of 89. The elegant splendour and silky smoothness of his batsmanship left the rather paltry crowd spellbound.

With Sri Lanka’s score reading 167 for three in the second innings, the crowd swelled. But unfortunately for the sizeable crowd, Sri Lankan batsmen fell like nine pins. They lost their last seven wickets for a mere eight runs. Off-spinner, John Emburey was the wreaker-in- chief by taking six for 33. In fact, his final spell of the game read five wickets for just five runs. England won the Test by seven wickets with Chris Tavare and Gower stitching a crucial partnership of 83 runs.

When Sri Lanka arrived in the Old Blighty to take on England in the one off Test played at The Oval, the home team were riding high after defeating South Africa. However, England’s setup soon crash landed with a thud, as on a surprisingly dry Oval track, Sri Lanka beat them. Sri Lanka looked at home under familiar conditions, while England’s seamers so used to bowling with a tinge of dewy pasture struggled.

Interestingly, Ranatunga won the toss and elected to field. It meant that even with the spin king Muttiah Muralitharan around, they were going to bat last. Graeme Hick and John Crawley amassed centuries. Crawley was the one who played a more enterprising innings. He played some crisp drives and used the depth of the crease to counter Muralitharan. But the off-spinner still took seven wickets in the Innings.

For Sri Lanka, the ‘Matara Marauder,’ Sanath Jayasuriya, left English bowlers and fielders in a state of shock with his gun blazing knock of 213. Aravinda de Silva himself played a soul-lifting innings of 145. On a track that was taking turn, England’s batsmen were rooted to the crease and paid the price. Steve James on his debut took 150 deliveries for just 25 runs. To make it worse for them, Mark Ramprakash ran out his partner and captain, Alec Stewart at a crucial juncture of the match.

Ramprakash though, seemed to have made up for it when he and Darren Gough, the tail-ender showed dogged defence against Muralitharan. But the tweaker kept turning the ball square. Ramprakash tried every trick in the trade to make sure that Gough didn’t face Muralitharan. Ramprakash was also using his soft hands with filigree precision to keep the spinner at bay.

Just when it seemed like Ramprakash with his technical brilliance would take them to safety, he succumbed to the wily wizard. Gough was the last man out. Muralitharan took nine wickets in the second innings. Sri Lanka only needed 37 runs to win the Test. Angus Fraser and in particular, Dominic Cork resorted to bowling bouncers. Sri Lanka though, went onto win their first Test in England. Muralitharan was rightly adjudged as the Man of the Match for taking 16 wickets.

The quaint charms of Kandy Stadium suddenly seemed to have turned into a war zone when Sri Lanka took on England in 2001. In a Test match that saw as many as 15 umpiring errors; most of them favouring England, the visitors won by three wickets.

Sri Lanka made 297 in their first innings, thanks largely to Mahela Jayawardene’s tough-as-nails knock of 101. They lost their last five wickets quickly. The Test match had already started to resemble more like some brawl taking place in a bar. Russel Arnold was given couple of reprieves by the umpires and that didn’t go down well with the English players.

It was followed by Nasser Hussain, the English captain scoring a century. He though, was let off twice by the one and only BC Cooray, the umpire. Hussain was in dire form then, and he would have taken those two bat and pad reprieves gleefully. It only became worse, as Hick, who looked completely out of sorts wasn’t given out twice. Hick still couldn’t open his account, as he succumbed to the magician, Muralitharan. The comedy of errors continued when Stewart was given a reprieve by bad umpiring, before he lost his wicket to a poor decision. A slew of decisions going England’s way and some pluck shown by the batsmen resulted in England taking a lead of 90 runs.

Gough and Andrew Caddick then bowled with fire and brimstone, but they were also aided by poor umpiring. Jayasuriya thumped Caddick, only for Thorpe to produce a batman-like effort to take the catch at gully. The problem was that the ball had clearly hit the ground. The (in)famous Coory though, decided that Jayasuriya should take a long walk back to the pavilion. A furious Jayasuriya threw the helmet to the ground. Atherton and Kumar Sangakkara, the non-striking batsman at that time soon had a clash. Atherton even seemed to be pointing his finger at umpire, Rudi Koertzen.

At six for 88, Sri Lanka looked dead and buried. But Sangakkara and Kumar Dharmasena made a match out of it with their determined efforts. When Sangakkara was on 95 though, Hussain perhaps sensed that he was going for the big one to reach his hundred and pushed the mid-on back. Sangakkara went for the glory shot and got stumped off Robert Croft’s bowling.

Finally, England needed 161 runs to win the game and break the hoodoo of their poor performances in subcontinent [England though, did win a series in Pakistan in 2000-01]. On a tense final day, England stumbled many times, before all-rounder, Craig White took them home. Even now the Test is remembered more for headlines such as ‘BC Bats for England’. But lest we forget that it turned into a cliff-hanger of a Test as well. England then, went onto win the series by winning the final Test match.

When England met Sri Lanka at Lord’s in 2006, the hosts were expected to steamroll their opponents. But it didn’t follow the script. England’s batsmen feasted on Sri Lanka’s attack and they reached a monstrous total of 551 for six wickets before declaring.

Sri Lanka in response fell to some fine swing bowling by Matthew Hoggard and were dismissed for just 192. But following on, Jayawardene compiled a nerveless hundred and some once-in-a-generation steely determination shown by the tail-enders took Sri Lanka to safety. It was a Houdini act enacted by the Lankans, as they were 359 runs behind after being bowled cheaply in the first innings. England’s fielders though, couldn’t catch cold in that Test, as they dropped nine catches in total.

When Sri Lanka played a Test series in England in 2006, Kevin Pietersen was about to hit rarefied zones as a batsman. He showed a glimpse of what was to come with his mystical brilliance in the second Test played at Edgbaston. Sri Lanka were bowled out for just 141 in their first innings. It wasn’t exactly a seamer’s paradise, but the Sri Lankan batsmen paid the price for playing loose shots. As the Test match progressed, it offered more encouragement for spinners.

The tormentor of England many times, Muralitharan had already started to weave a web around the batsmen. For once someone from England took him on and that was Pietersen. He was an epitome of fearless courage at the crease. With tinkle-toed footwork and rapier-like drives, he rattled the off-spinner for once. Pietersen was at his best when he swept the off-spinner for a six and then used the switch hit to clamber another six. After playing a superlative knock, he finally lost his wicket to Muralitharan. By then, he had almost taken the game away from Sri Lanka’s grasp single-handedly.

Sri Lanka could only muster 231 in their second innings and England won the match with six wickets in hand. The game is still remembered by many for Pietersen’s debonair hundred.

In the second Test played at Colombo (PSS), the pace and spin bowling combination of James Anderson and Graeme Swann helped England to bowl out Sri Lanka for 275. On a slow track, where each batsman was struggling for timing, it was left to Pietersen to raise the bar and take the game away from Sri Lanka. He used his reach to great effect by playing effortless drives down the ground against the spinners. He went back in the crease to cut and also played the occasional switch-hit. There were times when he was swatting Sri Lankan bowlers like a fly.

With England taking a lead of 185 runs, it all came down to survival for Sri Lanka. Jayawardene seemed to be expertly shepherding them to safety. But on the final day of the match, Swann ran through Sri Lanka’s batting line-up and England won the Test by eight wickets. Pietersen was yet again in the thick of things with his knock of 49 off 28 balls. 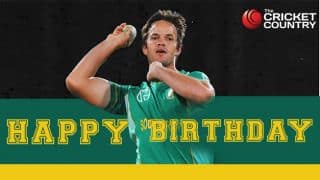 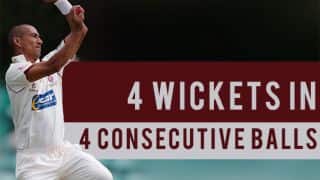