Sri Lanka will like to bank on the momentum they have gained after thrashing Ireland in the two-match ODI series.

With the Test series done and dusted, England and Sri Lanka lock horns for the five-match One-Day International (ODI) series with the first match at Trent Bridge, Nottingham A relatively inexperienced Sri Lankan side were outplayed in the three-match Test series but still showed signs of improvement which was pleasing to say the least. In a bid to prepare for the ODIs, Sri Lanka played a short two-match ODI series against Ireland in Dublin and won the series 2-0. This will serve as a morale boosting win for the Lankans when they take on hosts, England in their own den. Aditya Sahay takes a look at the key battles which may unfold in the first ODI between the two sides. Full Cricket Scorecard: England vs Sri Lanka 2016, 1st ODI at Birmingham

Alex Hales vs Nuwan Pradeep: Pradeep was the only bowler for the tourists who looked in good stead throughout the Test series. He picked up 10 wickets and was the leading bowler for the Lankans. He will take the confidence from the longer formats when he is pitted against Hales, who had a terrific series with the bat as well. He looked an improved batsman but missed scoring tons three times as he was dismissed for 80s (twice) and 90s (once). He will like to carry on but his biggest threat will be facing Pradeep upfront.

Kusal Perera vs David Willey: Perera must be high on confidence with his third hundred which he scored against Ireland in the final ODI. He will, however, face stern test against Willey as he will be England’s most dependable bowler and will like to get the wicket of Perera early before he settles. Willey causes some problem when the ball swings and will like to put the brakes on Perera’s scoring areas.

Dinesh Chandimal vs Moeen Ali: Sri Lanka’s new Mr. Dependable, Chandimal is having a good tour so far. He scored a century in the Test series and also followed his good run with the bat while playing against Ireland. He would like to keep his wicket intact in the middle-overs if Sri Lanka wants to post a big total or chase England’s target. England ODI and T20 skipper, Eoin Morgan will like to see the back of Chandimal as soon as he can and will try to bring in Ali so that Chandimal goes for the glory shot and gets caught.

Joe Root vs Sekkuge Prasanna: This will be a mouth watering contest when these two face each other on the field in the ODI series opener. Root, who is a quality player and plays spin well, will again be on focus when he takes stride for his side. He will be up against an upbeat, Prasanna who was among runs and wickets against Ireland. How Angelo Mathews uses him against England’s top batsman, i.e. Root and how well Root plays and rotates the strike against him may well determine the outcome of the match.

Jos Buttler vs Dasun Shanaka: Buttler has been the AB de Villiers for England since the past few years. He has said that he wants to play on similar lines as Villiers also. He will try to up the ante in the death overs, be it chasing or posting a total. His main threat could be Shanaka who picked up a five-for in his debut ODI match against Ireland. Shanaka will come to bowl in the last 10 overs when Buttler usually comes to bat or goes for the kill. The Sri Lankan would try to use his variations judiciously to bamboozle Buttler’s stumps.

There may also be some other interesting battles like Lahiru Thirimane vs Adil Rashid, Angelo Mathews vs Eoin Morgan and Upul Tharanga vs Steve Finn. Both the sides will like to start the series well with a disciplined performance.  READ: Angelo Mathews: Sri Lanka must be at best to beat England in ODI series 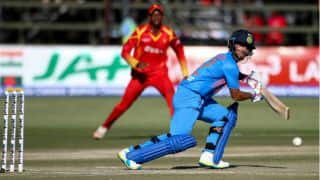