The 2nd ODI between England and Sri Lanka at Edgbaston proved to be a one sided match as the hosts went on to seal the game easily by 10 wickets.

The second One-Day International (ODI) between England and Sri Lanka at Edgbaston proved to be a one sided match as the hosts went on to seal the game easily. Batting first, Sri Lanka once again started tumbling early on but again it was Dinesh Chandimal and captain Angelo Mathews who stood up and added 82 runs between them. Comeback man Upul Tharanga made good fifty and helped his side in posting a competitive total of 254. In return, England’s opener Jason Roy and Alex Hales gave no room to the visitors as they kept playing and ended the game with 10-wicket win. Hales and Roy both remained unbeaten and added 256 runs between them leading to a record breaking match, Abhishek Kumar is back with his stat bag and presents some statistical highlights from this game. Full Cricket Scorecard: England vs Sri Lanka 2016, 2nd ODI at Edgbaston

2) Third hundred plus stand between Roy and Hales in ODIs for England. This is the second most number of century stands between England openers in ODIs after Marcus Trescothick and Nick Knight (Four hundred run opening stand).

3) Partnership of unbeaten 256 runs between Roy and Hales is the best by any English opening pair in ODIs.

4) Second instance of both the opening batsmen of England scoring hundred in ODIs after Trescothick (114*) and Vikram Solanki (106) against South Africa in 2003.

5) Partnership of unbeaten runs of 256 between Roy and Hales is the fifth best opening stand of all time in ODIs after Sanath Jayasuriya and Upul Tharanga (286), Tillakaratne Dilshan and Upul Tharanga (282), Brendon McCullum and James Marshall (274) and Sourav Ganguly and Sachin Tendulkar (258).

6) First instance of 250 plus unbeaten opening stand in ODIs.

7) First instance of a team chasing target of above 250 without losing single wicket.

8) Second instance of an opening pair making partnership of 250-plus runs in ODIs after Jayasuriya and Tharanga (286).

9) The 29th over of the second innings was bowled by Seekkuge Prasanna and he conceded 27 runs from that over. This is the joint second most expensive over for England after Dwayne Smith’s 27-run over in 2004 at Lord’s and Yuvraj Singh’s 30-run over in 2007 at The Oval.

10) This was England’s sixth 10-wicket win in ODIs and interestingly all came in this century. 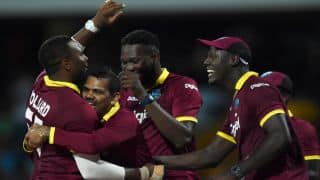