Sri Lanka are yet to taste victory against England on this tour.

Sri Lanka’s tour of England is finally coming to a close, with both the sides set to battle out one last time in a one-off Twenty20 International (T20Is) at Southampton. Having won the Test series 2-0 and One Day International (ODI) series 3-0, England would like to move forward to their series against Pakistan on the back of a perfect record. On the other hand, Sri Lanka have nothing to lose, so they may well go all out attack against the English side. The visitors were abysmal in the Test series, falling down without a fight. They certainly can keep their heads high on the back of a good 50-over series, where they gave the host a run for the money in first and fourth ODI. FULL CRICKET SCORECARD: ENGLAND vs SRI LANKA, One-off T20I, SOUTHAMPTON

Both the set of sides are expected to make changes from the previous series. For England, the likes of Joe Root, Moeen Ali and Alex Hales are set to be rested. As for Sri Lanka, Upul Tharanga has been left out of the squad. With so many changes around, let’s take a look at the key duels which may impact the proceedings.

1. Kusal Perera vs David Willey: Perera has to be the most disappointing figure in the Sri Lankan side after the ODI series. Considering much was expected of the player, he only amassed a meagre 77 runs in 5 matches. On the the other hand, Willey has done outstandingly well to establish himself as the best fast bowler in his side. With 10 wickets in the ODI series, he will surely be expected to cause more trouble to Perera and co. ALSO READ: England vs Sri Lanka 2016, one-off T20I at Southampton: Likely XI for Angelo Mathews and Co.

2. Jason Roy vs Nuwan Pradeep: The star of the ODI series, Roy will look to continue his outstanding form into this one-off T20I. The opener was at his mercurial best in the second and fourth ODI, scoring centuries in both those fixtures. He will be facing much off Pradeep, arguably the best bowler in this Sri Lankan unit. Pradeep was a force to reckon with in the Test series, but faded away in ODIs. A good contest between bat and ball will be at view.

3. Dawid Malan vs Suranga Lakmal: The uncapped Malan may get his chance to don the national colors. At 28, he may finally get the chance to live his dream after some good performances in the domestic T20. Should he bat at the opening slot, he will have to face Lakmal, who was the best Sri Lankan bowler in the ODIs with 5 wickets. Lakmal is a capable bowler who can bowl at a quick pace and trouble the batsman. But what he lacks is consistency. If he can get his rhythm right, expect Malan to have a task in hand.

4. Danushka Gunathilaka vs Tymal Mills: Gunathilaka was not at his exact best in the ODI series, but did fairly well. While 142 runs in 5 matches at an average of 28.40 may seem ordinary, there is more to him than what he has shown. He will come up against the much talked about Tymal Mills. The 23-year-old pacer has been the talk of the town for his displays in the shortest format of the game. A gruelling contest between two players whom their teams will rely upon.

5. Dinesh Chandimal vs Chris Jordan: Chandimal shone in the ODI series, scoring 267 runs in the 5 matches. The responsibility of being a wicketkeeper and being one of the most experienced player in the side seems to have brought the best out of him. He will be expecting to face a lot of England’s best T20I bowler, Chris Jordan. After playing a minimal part in the ODI series, Jordan will be leading the bowling attack for England in the T20I. His ability to bowl yorkers in the death overs will see him try to stall the charge of Chandimal to get runs on the board. 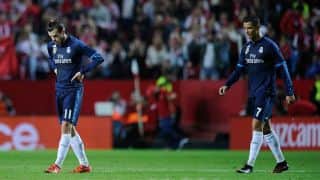