England won the first day-night Test they hosted on the Day Three itself by an innings and 209 runs.

It was an easy task for England, or at least that is how they made it look like, as they won the first Test of the series against West Indies at Edgbaston. England won the first day-night Test they hosted on the Day Three itself by an innings and 209 runs with dominant performances with both bat and ball. While West Indies failed to act as a unit, England s top-order and the bowlers made sure they made the match a special one. Here are some highlights from the match.

First day-night Test in England: Following the trend, one of the most orthodox teams in the cricketing world adapted the new concept of day-night Test matches with a pink ball. This caused much excitement about the match while the players too confessed to being excited about this new experience.

Joe Root s record: With a century in the Edgbaston Test, Joe Root completed his eleventh consecutive match where he has registered a score in excess of fifty. He is short of one more such feat to equal the record-holder AB de Villiers.

The massive 248-run partnership: It was the partnership between Alastair Cook and Joe Root that established England s dominance in the match. They added 248 runs together, which is the tenth highest by Englishmen for the third wicket. It is the highest for any wicket in a day-night Test.

Cook s personal records:Scoring a century at Edgbaston, Alastair Cook became the third cricketer to score centuries on both his day Test debut and day-night Test debut, after Faf du Plessis and Stephen Cook. He scored his career s fourth double-ton, taking the second spot in the list of most double-tons hit by English cricketers in Tests, equalling the numbers of Sir Len Hutton. His tally of 767 runs at Edgbaston is the highest by any cricketer at the venue now.

Stuart Broad s landmark: Stuart Broad, too, joined Cook in breaking records at Edgbaston. With two wickets in the second innings and three in the third innings of the match, he bagged 5 wickets from the match to take his tally of Test wickets to 384. He thus surpassed Sir Ian Botham to occupy the second spot in the list of England s most successful bowlers in the format, following his teammate James Anderson.

West Indies lose 19 wickets in a day: West Indies had a huge target to chase and they failed miserably. Losing just one wicket till stumps of Day Two, they went on to lose 19 wickets at Edgbaston on Saturday to hand England the huge victory. They were bundled twice for 168 and 137 respectively on the same day, with the highest score by any batsman in the third innings being 40 by Kraigg Brathwaite. 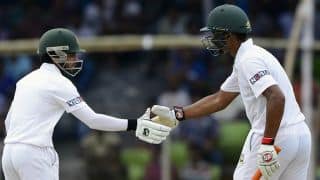