There had been calls for Alastair Cook’s head following the shock defeat at Lord’s. The English captain had silently fought back, turning the tables on the Indians, and eventually crushing them to an imposing 3-1 defeat. Abhishek Mukherjee lauds the resurgence of the Essex champion.

They had bayed for Alastair Cook’s blood after England had inexplicably succumbed at Lord’s to MS Dhoni’s leg-theory that was perfectly executed by Ishant Sharma. Cook had been verbally ripped apart by Michael Atherton at the podium after the match. There had been calls of replacing him as captain mid-series — and even dropping him. This was the same blue-eyed boy the British media had once marked out as the one who would go past Sachin Tendulkar’s records.

Three Tests later and a month, as England have rubbed the Indian nose to the ground with the margin of defeat getting bigger with every match (266 runs at Southampton; an innings and 54 runs at Old Trafford; and an innings and 244 runs at The Oval) Cook has re-strengthened his stature as English captain. Once again he was called up by Atherton — this time a kinder version — to the podium.

It is not easy for an average cricket fan to fathom Cook’s mental strength: England were blown away in the Ashes, and had lost to Sri Lanka at home, and he had performed abysmally with the bat as well (a drop that had started from the home Ashes). Let us, for once, place ourselves in Cook’s shoes: would we have even dreamed of coming back so strongly, both as an individual and a team?

Champions can that do that, and Cook is a champion. You can hold him down, but you cannot keep him down. He will keep bouncing back. He will not sledge you. He will not lose his temper in the process. Instead, his eyes will be more focussed and his jaws clenched, and he will get along with his job with a smile; and emerge victorious; and retain dignity in the process. 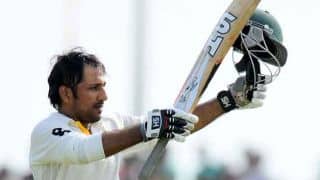