Moeen Ali, an excellent all-rounder, is not really a No. 4 batsman. Neither is Ben Stokes a No. 5. Arunabha Sengupta looks at the curious batting line up of England and writes why tactics such as these are bound to fail.

Being routed in three Tests in a row is never pleasant. One tends to look for the nearest rock to squeeze under, to lick war wounds and deal with disappointments, while advice and admonition flow in from every renowned and obscure corner.

Alastair Cook s men are a rattled lot, especially so after the hopes of the men and their fans had soared with the extremely strong showing in the first Test. Two excellent batting performances, then having India six down and fighting for survival on the last day that was perhaps the best start to the series they could have hoped for.

Curiously, it was perhaps that very Test which led England to the mirage of false securities that turned out to be the way to dusty death.

Yes, the Rajkot pitch was a well paved road. And on that wicket, Moeen Ali came in at No. 5 and piled up 117. Ben Stokes entered next, at No. 6, and made a polished 128. Jonny Bairstow walked in at 343 for 5 and flayed the bowling for 46. England ended the Test with the firm conviction that their line-up worked. They batted deeper than any team could hope to and everyone seemed to be in fine nick.

Then came the reversal at Visakhapatnam. Of the men alluded to, Stokes and Bairstow again batted with zeal and spirit. Moeen failed, but was doing an excellent job with the ball. And he had just got a century in the first Test, so this was perhaps a minor blip.

After the loss, the gamut of all-rounders afforded England the opportunity to stack their side with plenty of bowlers. The men from the island learn to use seam as their most potent instrument. Having more than two seamers always bestows comfort-feel on the skipper. However, history and surfaces screamed for spin. The batting skills of the all-rounders, and the way they had proved themselves with the willow at Rajkot, provided the luxury of both to Cook. They could pack the team with three regular spinners and three regular pacers.

In fact, the only weak link in the batting seemed to be the specialist No. 4, Ben Duckett. Like many of his countrymen before him, the young man seemed to have no clue how to handle the dipping, spinning ball on turning tracks. So, the solution was simple. Include the reserve wicketkeeper as a specialist batsman. Move Moeen to No. 4. Everyone can bat, so we don t have to worry about depth.

There have been quite a few mistakes on the field by Cook as the tour has progressed. There have been the selections of Ball and Batty, who have had little to do other than provide trivia lovers the delight of names resembling cricketing-equipment. There have been painfully long periods of spin, even off-spin, bowled without a man deep on the long- or fine-leg fence. This has given wristy Indian batsmen every opportunity to turn regulation singles into twos as the patrolman has huffed and puffed his way from deep square leg.

But the biggest blunder has been perhaps to bring Moeen up to No. 4.

This is an international Test side claiming to be one of the best in the world. Citing four centuries and claiming that these indicate he can bat is statistically erroneous logic. The hallmark of a good top-order batsman is consistency. A few good innings do not prove someone can regularly deliver with the bat. Moeen, whose average stands at 32.77, is an excellent utility cricketer, but by no means a No. 4 batsman.

Player-to-player comparison gives us Cook and his opening partner squaring up favourably against Murali Vijay and KL Rahul. Joe Root is one of the best in the world, and Cheteshwar Pujara a very good batsman. But then suddenly as Virat Kohli strides out like a colossus, England responds with Moeen. This is ridiculous and alters the balance of the contest.

Ben Stokes is a phenomenal cricketer. As an all-rounder, he is outstanding. And I have never seen a slip fielder with his athleticism. He somehow manages to do a fascinating job of diving and sliding in the outfield, sending in outrageous returns from the deep, being all the while stationed in the slip. No close in fielder has chased the ball with such zest.

But again, with his average of 34.68, Stokes is not a man fitted for the role of No. 5. One position lower, and he could indeed be as handy with the bat as Ian Botham, the man to whom he is so often compared. But he is not a specialist batsman in a very good team.

Bairstow has a batting average of 41. That is perhaps good enough for a wicketkeeper in the modern times, but only if his role is that of a wicketkeeper-batsman. If the thought process of the team runs that since we have Bairstow, Stokes and Moeen, we can do away with a couple of specialist batsmen, it is a grave, grave blunder.

And after this comes Chris Woakes, yet another excellent all-rounder, whose batting and bowling averages hover around 29. For a bowler, that is very good. For a batsman, it is less than ordinary. Handy in a lower order batsman, but less than adequate if we are bartering the places of specialist batsmen because of these supposed batting skills.

All these men, Moeen, Stokes, Bairstow, Buttler, Woakes, are handy men to have in the batting line-up, some in the lower middle-order and some in the lower order. But, unfortunately, they are not specialist batsmen.

In the last two Tests, English specialist batting effectively ended at No. 3, with the magnificent Root. On top of that, they had a debutant accompanying Cook in the fourth Test, and someone with very little experience in the third.

It is a time-tested fact that a well-balanced side requires five specialist batsmen. If there is indeed an all-rounder who can be counted as a regular batsman to dispose of the 5th batting spot, he has to be a Garry Sobers (average 57.78) or a Jacques Kallis (average 55.37): in other words, all-rounders who were genuinely great batsmen in their own rights.

Even when the formidable South African side played with a truckload of genuine all-rounders in the 1990s and 2000s, they did not field less than five good batsmen.

The lower order of a Test side cannot start from No. 4.

There are instances of teams trying this and ending second-best.

In 1954-55 at Adelaide, Australia tried to take advantage of several outstanding men who excelled both with bat and ball and play a batsman less. Les Favell, Arthur Morris, Neil Harvey and Graeme Hole were the batsmen. Keith Miller came in at No. 3 in the first innings, at No. 4 in the second. Richie Benaud was the No. 3 batsman in the second innings. Ron Archer, Ray Lindwall and Ian Johnson formed a fantastic lower order. But that was not good enough to replace a genuine batting line up. Brian Statham reduced them to 231 in the first innings and Frank Tyson blew them away for 111 in the second.

Another similar Test match was at Ahmedabad in 1983-84, when Kapil Dev led India against the mighty West Indians. On a dicey wicket, the men from the Caribbean were all out for 281, and carried by a belligerent Sunil Gavaskar, India were soon 127 without loss.

But, after Gavaskar and Anshuman Gaekwad, India had the debutant Navjot Sidhu and the perennially unreliable Sandeep Patil. After that came the all-rounders:. Ravi Shastri at 5, Roger Binny at 6, Kapil Dev at 7, Kirti Azad at 8, Syed Kirmani at 9. Against that tremendous bowling attack, India fell for 241 in the first innings and were reduced to 63 for 9 in the second before Kirmani and Maninder Singh added 40 for the last wicket to take them past 100.

All these examples hint at one undeniable aspect of a batting line up built out of lower-order batsmen. Inconsistency. They can fire one day and not do so the next. For lower-order batsmen, inconsistency and fluctuations are greater. That is why, irrespective of a genuine good innings or two, their averages remain ordinary. The failure rate is high.

The top-order batsmen score more consistently. That is their job.

Hence, a batting line up loaded with all-rounders rather than batsmen generally perform like England at Wankhede or India at Ahmedabad in 1983. 400 in one innings, a spineless 195 in the next. One cannot replace genuine batsmen with half-baked batting available from all-rounders.

Perhaps a close look at the available batting options and, if required, a call for reinforcement, is necessary before England take field in Chennai.

(Arunabha Sengupta is a cricket historian and Chief Cricket Writer at CricketCountry. He writes about the history of cricket, with occasional statistical pieces and reflections on the modern game. He is also the author of four novels, the most recent being Sherlock Holmes and the Birth of The Ashes. He tweets @senantix.) 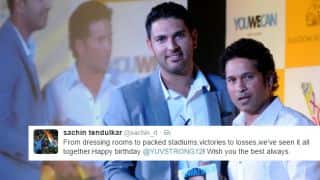