The Alastair Cook-Jonathan Trott pairing clearly did not work out in the first Test.

England lost the war of attrition in the first Test at Antigua as West Indies scrambled home to a draw. While England needn’t panic just yet, an infirmity which first surfaced in early 2013 remains unaddressed. England have struggled to identify their second opener, who will partner Cook at the top. Ankur Dhawan wades into the deep trench that England have dug up for themselves, as they prepare for a fiery home summer.

In all likelihood, England may still maul West Indies in the ongoing Test series, but in the backdrop of the ensuing home series against New Zealand and Australia, the relevance of the victory will be minuscule. And should they lose, the problems will proliferate.  But, all said and done, England are expected to win in the West Indies and settle on a combination which will endeavour to regain the Ashes at home against an Australian side on the rampage. The early signs indicate that their chances are sanguine. Sulieman Benn dropped from West Indies squad for second Test against England

England’s biggest predicament at this stage remains the form of Alastair Cook and his partner, whoever that Mr X  is, come July. That’s a major chink in their armour. England haven’t identified Cook’s co-star since the premature and utterly unfair axing of Nick Compton, who would have felt vindicated at least thrice since being dropped. Botham proud of Anderson becoming England’s highest wicket-taker in Tests

Compton had done no wrong, when England’s smugness got the better of them. England were a winning unit back in the summer of 2013. They had overcome the enormous hurdle of beating India in India and routed New Zealand at home. The old brigade seemed in sublime form, while the young had blended into the team quite seamlessly. Jason Holder: My job was simple; it was just to bat

Little did they know that they were about to commit a cardinal sin, which will continue to haunt them two years down the line. In order to fast track Joe Root’s progress, he was promoted to open the innings in place of Compton, who was accused of being too defensive.

By the end of a successful Ashes campaign at home one thing was clear, contrary to what was intended, Root’s progress had in fact been stalled. Except a rickety 180 at Lords, Root failed to impress in his new avatar as opener. His tendency to linger on the back foot was exploited by the Aussie pacemen with the new ball, and it was obvious the problem would only aggravate on the faster, bouncier pitches in Australia on England’s return leg. England had blundered, but its ramifications were yet to ensue. James Anderson proud to surpass Ian Botham to become England’s leading wicket-taker in Tests

Since Compton’s departure England have tried four other candidates, including Root, to partner Cook. Michael Carberry donned the hat in Australia, without setting the world on fire or embarrassing himself, amidst utter chaos, But the Hampshire batsmen was on the wrong side of 30.  Sam Robson was then inducted and subsequently discarded last season, after an unimpressive seven Tests, which included one century. Anderson becomes leading Test wicket-taker for ENG during 1st Test vs WI

In addition to England’s relentless quest, Cook’s own form has been suspect for what seems like a lifetime. The run famine can be traced back to the aforesaid home summer of 2013. But then, the parched runs column has always been some kind of a hoodoo with English captains.

So, England arrived for their Caribbean sojourn on the horns of a dilemma. The first of the three Tests also marked the return of Jonathan Trott. The right-hander had been on an indefinite sabbatical following a stress related illness, which had compelled him to pull out of the 2013-14 Ashes after the Brisbane Test. Jason Holder’s transformation into a batting all-rounder holds great hope for West Indies

To his credit though, Trott scored runs by the bucket on his return to county cricket, thereby paving his way into the English side. However, with England having finalised their middle order, the only spot to accommodate Trott was at the top alongside Cook. This is where England erred yet again. Michael Vaughan, Geoff Boycott criticise England openers during 1st Test against West Indies

Perhaps the idea was to ease Trott into the team at the earliest. It is unimaginable that England consider Trott a long-term solution at the top of the pecking order, but in the current scenario it is equally inconceivable to see him replace anyone in the middle order. While it might be premature to pronounce a judgement, the move failed to inspire confidence at Antigua as Trott’s two innings combined fetched a meagre four runs, including a five ball duck in the first innings. West Indies vs England: Jonathan Trott completes 50 Tests for England

Keeping the Ashes in mind, it must be remembered that Trott appeared completely discombobulated against the Aussie pacers over the last six Tests that he faced against them. While Australia was his favourite punching bag once upon a time, the second half of his career was in stark contrast.

The Australians will be smacking their lips at the prospect of unleashing their fast bowlers on him again, if England dare to make the mistake of opening the batting with him. A young man from Yorkshire, meanwhile, is missing out on opportunities to find his bearings in a more amiable environment than what the Ashes might offer.

By opening with Trott in the first Test of the series, England have delayed the entry of the highly rated left-hander in Adam Lyth. The Yorkshireman had an illuminating 2014 County Championship following which he was touted to partner Cook in 2015.

One doesn’t associate flexibility with England, so chances are that Trott will have the rest of the West Indies tour to prove his credentials as an England opener, while the team is winning, or are at least expected to win. But the move has opened another can of worms for a side that prides itself on planning and strategising.

Trott’s inclusion as an opener alongside Cook and with Gary Ballance to follow at number three also renders England’s physiognomy one dimensional. Lyth, on the other hand, is renown for his uninhibited stroke play and a distinct ability to change gears as per the requirements of the situation, something Trott seems bereft of in the latter part of his career. 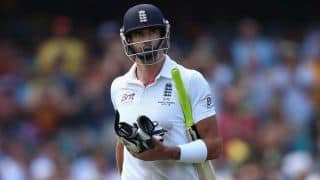 Premangsu Chatterjee takes 10 for 20, best First-Class figures by an Indian