England bowlers have been made to toil hard despite some good bowling efforts. Abhijit Banare looks at the game-changing moments in England’s previous two Test series which is common to the first Test against India.

By now, this article seems a touch irrelevant looking at Bhuvneshwar Kumar and Mohammed Shami’s partnership on the second day. England faced a similar struggle while trying to dismiss Rangana Herath at Leeds, which saw the match slip from their hands and they went on to lose a thriller. However, England’s frustration in dismissing the lower order begins with the inability to capitalise after making early inroads. It’s the No. 6 and No. 7 batsmen (usually the last recognised set of batsmen for any team) who have snatched the momentum of the Test.

To begin with the most recent example, India were on the mat, losing two of their star batsmen in quick succession post lunch. A painstaking innings from Ajinkya Rahane came to an end with India precariously placed on 178 for four. Despite a flat deck, England bowlers could’ve easily pocketed the momentum if they had managed to get MS Dhoni early. The Indian skipper came in with an unconvincing overseas Test record. The next thing you know, Dhoni and Murali Vijay had added 126 for the fifth wicket.

Same was the case in both of their Tests against Sri Lanka. Even on this occasion, the opposition skipper was responsible for piling on the frustration. Angelo Mathews struck consecutive tons of which the second one helped Sri Lanka fight back. Mathews, along with Herath took Lanka past 400 from 277 from six.

The Ashes 2013-14 was a series-winning effort altogether for the No 7 batsman. Brad Haddin scored 493 runs in eight innings at an average of 61.62 with five fifties in a row and a century. Though George Bailey at 6 was not that effective, he still came up with a few handy innings.

Below is the runs scored by No. 6 and No. 7 in last seven Tests against England. A total of 943 runs in 11 innings at an average of 85.72. This gives an indication of where things go wrong for England.

The late partnerships give the much needed confidence to the tail-enders to follow and predictably they knock a few more runs to pile on the misery. This has been a case with India as well, who have given away many matches in such fashion. While the batting has been a worry, England’s bowling too has looked ordinary due to the late order surge.

In England’s defence, the chances got reduced significantly when the opposition batsmen were in form. It was a series that belonged to Haddin’s gutsy batting as much as it did for Mitchell Johnson’s thunderbolts. For Sri Lanka, it was only a matter of time that their new captain showed his true class and he chose England to strike form. Dhoni too came back with a new approach to his Test batting. But these partnerships are clearly costing them the confidence and the match which gets carry forwarded to the next Test and the next series. 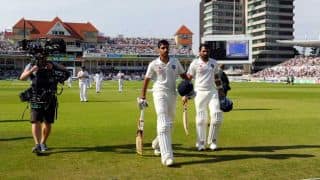