India’s reluctance to accept the system has led to inconsistency in the way cricket is played around the world.

Just suppose you are living in a developing city where local train run at 50 kmph and the administrators are talking about introducing bullet trains that runs 500 kmph — similar to the ones in Shanghai and Tokyo. But it’s a time consuming project. Imagine a scenario where there the government comes with an option of a train running at 150 kmph till the bullet train is developed and citizens are whining about it: to the take the existing local train or wait for the bullet train.

Doesn’t that sound absurd? Well, that’s the story of Board of Control for Cricket in India (BCCI) and their stance on the Decision Review System (DRS). India’s reluctance to accept the system has led to inconsistency in the way cricket is played around the world. One remembers the infamous commentary box controversy that sparked between Ravi Shastri and Nasser Hussain in 2011, where the former, an avid advocate of BCCI, opined about the flaws of the system. It will be interesting to see what Shastri, now the Director of Indian team, has to say now after the Galle Test defeat. [Also Read: Ravi Shastri and Nasser Hussain: When DRS caused a rift between two commentators]

No excuses offered for the dismal Indian batting show in the fourth innings, but had DRS been in place, an innings defeat for Sri Lanka was a likely result. Rewind to the second day. Indian captain Virat Kohli, after scoring a brilliant hundred, was soon judged leg before. The ball spun considerably and would have missed leg-stump.

Ajinkya Rahane, who has been India’s run-machine in the recent times, was adjudged leg before for a duck. Again, DRS could have saved him.

The most disappointing was that of the in-form Wriddhiman Saha given out caught off the helmet while attempting a hook.

On the third day, Dinesh Chandimal possibly played one of the greatest innings ever by a Sri Lankan batsman to help them comeback in the game. Had it been possible with DRS in place? No. Earlier in his innings, Chandimal top-edged a sweep to Cheteshwar Pujara at backward square-leg and was not given out.

In the very next over, Thirimanne survived a bat-pad catch off Amit Mishra. Chandimal later was lucky again when he was adjudged not out after a drive from him ricocheted straight to Mishra after hitting Rohit Sharma’s boot. However, this decision was referred to the third umpire, who turned it in batsman’s favour.

Fortunes smiled on the Lankans and the duo went on to add 135 for the sixth wicket and Sri Lanka gained a lead.

In his column for Times of India, former Sri Lankan captain Mahela Jayawardene wrote, “I sympathise with some of the BCCI’s concerns about the accuracy of DRS, especially ball-tracking, but on balance, the use of the system has clearly reduced umpiring errors and improved the game. India would have won had DRS been used in Galle.”

Jayawardene is spot on. And over the years, the International Cricket Council (ICC) has presented numbers to show how the use of technology has seen more correct decisions. During the Ashes in 2013, ICC CEO Dave Richardson laid emphasis on figures stating that the use of DRS had helped correct decisions by 5.5 percent.

While most in the world have adopted this, India have been dismissive on this issue. And when the presenter dared to ask Kohli about BCCI’s perceived ‘Dreadful Review System’, the Indian captain said, “You have to sit and analyse and ask the bowlers what they feel about it. Ask the batters what they feel about that. We literally just came into this Test match with very less time on hand. So now that we have time, I am sure these discussions will take place.”

Though it wasn’t a strong statement, but the dismissive attitude seems to have diminished. One positive from the Galle Test defeat is that India will at least take a short step ahead and discuss the DRS. Technology is always at its advancement and in days to come something will arrive that may even make the bullet train look vintage. It only makes sense to adopt the current advancement and work towards its development. 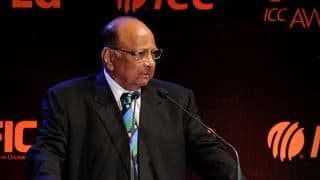