Eoin Morgan, born on September 10, 1986, is an Irish-born England cricketer who is currently the lynchpin of the middle-order in the limited overs format. He is one of the most exciting and explosive batsmen operating in the sport with his unorthodox strokeplay. Currently he is one of the best finishers of the game. Jaideep Vaidya goes through his career so far. Eoin Morgan, born on September 10, 1986, is an Irish-born England cricketer who is currently the lynchpin of the middle-order in the limited overs format. He is one of the most exciting and explosive batsmen operating in the sport with his unorthodox strokeplay. Currently he is one of the best finishers of the game. Jaideep Vaidya goes through his career so far.

Eoin Morgan is the sort of batsman who would make the writers of the MCC coaching manual wonder about the basic tenets of batting. Welcome to the world of Morgan where orthodox is passé; why play cover drives, square cuts and on-drives when the southpaw can play reverse sweeps, reverse flicks and reverse dabs? He takes innovation to a whole new level and looks the nonconformist product of gully cricket, rather than being the MCC-approved textbook batsman. One of the most exciting limited-overs players around, Morgan is an out-and-out product of the Twenty20 generation of cricket, where innovation and entertainment go hand-in-hand. He draws more than a few winces from the more conventional folk.

Morgan is a strong leg-side player who also loves a whack straight down the ground. When he was young, in winters when the cricket fields used to be covered in snow in his hometown Dublin, the left-handed Morgan would play on a four-feet wide concrete strip with a wall to blank out the off-side and an open park on the on-side. It was but natural that he would develop strong leg-side strokes such as the pull, which is his favourite shot. Morgan is also a connoisseur in unorthodox cricketing strokes, especially the reverse category, and has played quite a few of them which commentators have found difficult naming and describing. For him, it doesn’t matter how you get the runs as long as you get them. He is the antagonist to the Dravids, the Trotts and the Cooks. The usual angles and shapes you have to get your body into while playing shots don’t matter scant to him; any angle is a good angle if I can somehow get the ball past or over the fielder.

It is said that Morgan developed his pyrotechnics by playing hurling (a Gaelic and Irish sport which is a cross between baseball, hockey, rugby and basketball) as a youngster. The grip of the hurling stick, or hurley, is very similar to the one employed while playing a reverse sweep, and Morgan played this sport twice a week in school. His supple wrist movement thus seems a lot more normal after getting to know this titbit, even though he doesn’t give the credit to hurling. “People ask me if I played hurling, but the truth is I’ve always been able to manipulate my wrists like this,” he told All Out Cricket in an interview. Another feature in Morgan’s batting is his crouch-and-bounce while the delivery is being bowled, a la Brian Lara. “It started about two-and-a-half years ago (early 2012) and it got more exaggerated — it was probably at its peak this time last year…I’d generate much more power and it enabled me to hit yorkers. The theory was applying something similar to a boxer throwing a ‘straight’; he would squat and go from high to low, and punch you in the face. By dipping and then coming up, I’d generate more power and it would be more effective than, say, standing and hitting you in the face with no momentum,” he explained.

Whatever be his style, Morgan has done well for himself since his first international game, a One-Day International (ODI) for Ireland against Scotland in 2006. In February 2007, Morgan hit the highest individual score in Irish history with a magnificent unbeaten 209 against UAE. Finally, after playing 23 ODIs for Ireland, Morgan was eligible to play for England after representing Middlesex since 2006. Morgan revealed that he always dreamt of playing cricket for England, right from childhood. “From the age of 13, I wanted to play cricket for England,” he told the Sunday Times. “I’ve never felt any shame in saying this is what I wanted to do. And the people at home involved in cricket, they were like, ‘Fair play, it’s going to be unbelievable if you make it’. So I’ve never had any shame about this and my father’s never had any shame about it.” It was a big move, since he had represented his home country Ireland ever since the youth teams. He was the top-scorer for Ireland in the 2004 Under-19 World Cup. Two years later, he captained Ireland in the 2006 Under-19 World Cup where he finished as the tournament’s second-highest run-scorer. He also represented the senior team in the 2007 World Cup, where Ireland did reasonably well, defeating Pakistan.

After the switch, Morgan played for the England Lions and participated in the England Performance Programme (EPP) in India in 2008, and even got picked in the senior squad a number of times, but did not get to play until May 2009 when he debuted for England in an ODI against the West Indies. A reasonably good summer followed where Morgan impressed with two scores of 40-plus in six ODIs against Australia in a series where England lost the first five games. In the Champions Trophy that followed in South Africa, Morgan took England to an unexpected victory over a mighty Sri Lankan side with an unbeaten 62. In the next match against the hosts, Morgan kept wickets for the first time in his professional career after Matt Prior was ruled out due to an illness. Morgan celebrated the occasion by scoring a blitz 67 from just 34 balls. His slam-bang and innovative style of batting earned him a call-up to the England squad for the 2010 World Twenty20 in the West Indies, where he top-scored in the group games against the hosts and his native Ireland in the group stages, and in the Super Eights against New Zealand. He remained unbeaten in the semi-final and final, even as England won their first World Cup.

In January 2010, Morgan was bought by the Royal Challengers Bangalore (RCB) franchise of the Indian Premier League (IPL) for $220,000. His performances also got him a place in England’s Test squad for a home series against Bangladesh after Paul Collingwood was rested. Morgan scored 44, 37 and 80 in his first three innings of Test cricket. Then, in an ODI series against Australia, Morgan scored an unbeaten 103 off 85 balls at the Rose Bowl — his third ODI century and first for England — and followed it up with a half-century in the second match. England won the series with two games to spare and Morgan was named Man of the Series. In the following Test series against Pakistan, Morgan was picked in the first Test at Trent Bridge after an injury to Ian Bell. Morgan scored his maiden Test century — 130 as England trounced Pakistan by 354 runs.

The following year in 2011, Morgan pipped Ravi Bopara for the No. 6 spot in England’s Test squad after Paul Collingwood’s retirement. In a three-match series against Sri Lanka, which England won 1-0, Morgan scored 168 runs in four innings including two half-centuries. In the T20 International (T20I) series that followed, Stuart Broad replaced Collingwood as the captain and Morgan was named his deputy. In the ODIs, which England also won 3-2, Morgan hit another two half-centuries and retained his place in the four-Test series against India. After three flop innings, Morgan showed up in the second innings of the second Test at Nottingham with a quickfire half-century. Morgan then scored his second Test century in the third Test in Birmingham, even as England snatched the world No 1 Test ranking from India. Morgan was rewarded with captaincy of England after Alastair Cook was rested for England’s one-off ODI against Ireland, thereby becoming the third Irishman to skipper England after Sir Tim Carew O’Brien (1896) and Fred Fane (1907-1910). He celebrated his captaincy debut with a gutsy knock of 59 to anchor the innings that got him the Man-of-the-Match award. A shoulder injury ruled him out for a few games before he returned for the Test series against Pakistan in the UAE in the winter of 2011-12. Morgan, along with all England batsmen, struggled in the series which England lost 3-0. In a classic case of last-in-first-out, Morgan was made the scapegoat and axed from the Test squad. He has never donned the white flannels since.

In the meantime, Morgan continued to shine in the two limited-overs formats and was snapped up by the Kolkata Knight Riders (KKR) for $350,000 in the 2011 IPL auction. Morgan established himself as a good finisher of the game, coming in to bat at Nos. 5 and 6. He was England’s answer to Michael Hussey and Yuvraj Singh, and an explosive one at that. “He’s been a breath of fresh air for the 50-over game,” former England captain Mike Gatting told the BBC in March 2011. “He plays in a way that pleases everybody and he is getting runs.” That being said, ever since his golden period in 2010-11, he hasn’t quite been able to be consistent in his form, but England have marked him out as captaincy material for the future, after he was handed over the reins of the ODI team again in the summer of 2013 when Cook was rested for the Australia series. At 27, at the time of writing, he has got age on his side and is one of the most exciting players in world cricket at the moment. 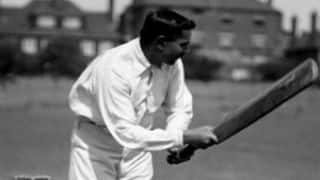 KS Ranjitsinhji: Prince of a small state, king of a great game