The closest that Eric Barbour had ever come to the ‘Baggy Green’ was when he had been selected for the Australian team to tour South Africa in 1914-15.

According to Greek Mythology, Hermes was the Greek god of commerce, son of Zeus and Maia. Quick-acting and cunning, he was able to move swiftly between the world of man and the world of gods, acting as messenger of Gods and the link between mortals and the Olympians.

Hermes was the protector of travellers, thieves and athletes. He occasionally tricked the other gods for his own amusement or in an effort to protect humans. With the ability to move freely between worlds, he also served as the guide of the souls of the dead to the underworld and the afterlife.

In 1886 a small coterie of undergraduates of the University of Sydney evolved the idea of a students’ journal; one of the leaders of the group that founded Hermes was Mr GP Barbour. The toddling Hermes was to contain 16 pages of mainly irresponsible and therefore interesting University items, and showed little promise of the wings that he has since developed.

Our narrative begins with George P Barbour, the academician who later became Headmaster of Toowoomba Grammar School in 1910 and over twenty-five years built it into one of the best public schools in Queensland, especially by broadening the curriculum. Having been a keen sportsman himself in his youth, excelling in representative cricket, rugby, and tennis, sports enjoyed a large presence in his scheme of things for the school, the Headmaster often joining his students at their various sports. George had married Isabella Fredericka Hibberd, daughter of the Rev Frederick Hibberd, in 1890. They then raised a large family replete with four sons and four daughters.

Their first-born, a son, arrived on January 27, 1891 at Sydney, and was named Eric Pitty Barbour. An excellent scholar, Barbour was dux of Sydney Grammar School, completing his Junior in 1907 with 7 ‘A’s. In 1909 he secured the medals for Latin and English.

He was also exceptionally gifted at cricket: his aggregate of 2,146 runs in 1908-09, a school record, is testimony to that. He played for the Sydney Grammar School 1st XI for 5 years, scoring 9,867 runs (with 19 centuries, including his highest individual score of 356 against Shore in 1908-09) and taking 493 wickets. He was Captain of the Tennis Club and Head of the School in 1909. In his book Stroke of Genius, Gideon Haigh, not one to go overboard with lavish praise, said that Barbour “has been the finest flower of Sydney private school cricket before the war, scoring nearly 10,000 runs and taking nearly 500 wickets for Sydney Grammar.”

Barbour made his First-Class debut while still at school, playing for New South Wales (NSW) against Queensland at Sydney from 1908-09 as an 18-year old. He scored 40 and 0 and picked up 3 wickets. In his second and third matches for NSW, he had scores of 124* and 160.

He also entered Medical School at St Andrew’s College under the aegis of the University of Sydney in 1910, rapidly rising to prominence with his multifarious skills. He gained Blues in cricket, tennis and baseball and was voted President of the Undergraduates’ Association, and was Editor of Hermes (the in-house magazine his father had cofounded) for two consecutive years, and Vice-President of the Union. He took his MB degree in March 1915 and was appointed Senior Resident Medical Officer at Toowoomba Hospital. He married Dora Grieve on August 14, 1915 in Sydney.

The closest that Barbour had ever come to the ‘Baggy Green’ was when he had been selected for the Australian team to tour South Africa in 1914-15. He was one of the three selected for the opening slots, the others being the left handed Warren Bardsley (the first man to score a century in each innings of a Test) and the right-handed Ernie Mayne, who had opened for Australia in the Triangular series in England in 1912. Sadly, Barbour had to withdraw from the tour on account of his medical studies (ironically, he was replaced in the touring squad by Roy Park, also a medical student at Melbourne University). In any case, the tour was subsequently cancelled in view of the impending War situation in Europe.

With World War I raging, Dr Eric Pitty Barbour enlisted on October 1, 1915 and embarked from Sydney four days later with the rank of Captain on the HMAT Warlida, bound for Egypt. He served in Egypt till June 1916, and then joined the Anzac Provost Corps in France on July 6, 1916. He was posted to the Training Depots in England on February 17, 1917, and to the Administrative HQ, London, from October 28 that year.

Crossing over to France, Barbour was transferred to the 1st Australian Field Ambulance on December 18, becoming RMO 1st Field Artillery Brigade from February 28 to April 21, 1918. He was then with the 6th Australian Field Ambulances from May 28, being the RMO of the 23rd Battalion from June 4 to September 11, 1918 and with No. 2 Divisional Train from November 8, serving till he was demobilised.

During his time in England in the War years, Barbour played 8 Second-Class games, 7 of them at Lord’s for various teams. The first of these was between the Army and the Australian Imperial Forces in 1917, played mainly to raise funds for St. Dunstan’s Hostel for Blinded Sailors and Soldiers. We find Barbour in a leading role in this game, being skipper of the Imperial Forces. Most of these games were played to raise funds for different charities, the next game, Australian XI versus Indian Gymkhana, being in aid of Widows and Orphans of Firemen and Stokers.

Three matches were played between ‘England’ and the ‘Dominions’ in 1918, all played in aid of charities. Barbour had the honour of leading the Dominions teams for these games.

He was 31 by the time he came back to First-Class cricket after the War, in 1922. He was gradually picking up the reins of his medical practice and raising a young family. He played only 2 matches after The War: in 1921-22, Barbour was part of The Rest that took on an Australian XI and scored 20 and 16. His last First-Class game was in a match representing an Australian XI against his old team NSW in 1924-25: he scored 0 and 1.

It was also the last First-Class match of Sammy Carter, the first wicketkeeper to sit on his haunches and the inventor of the ‘scoop’.

With his active playing days behind him, Barbour returned to full time medical practice, at Dorrigo (1919 to 1923), at Stockton (1923 to 1929), and at Kensington till his death. He wrote on subjects related to cricket in Sydney Morning Herald and Sydney Mail. One of his most remarkable articles for Sydney Morning Herald was entitled The day Bradman and Ponsford batted their way into history and was published on August 22, 1934; it gave a graphic account of the first day’s play of the 5th Test between England and Australia at The Oval, with particular emphasis on the historic 451-run 2nd wicket stand between Bradman and Ponsford.

Based on his experience as a cricketer, he wrote a coaching manual for young would-be cricketers called The Making of a Cricketer: A Handbook for the Young Player with Ambition to Improve, published from Sydney by Sydney & Melbourne Publishing Company in 1926. Along with the great Alan Kippax, Barbour co-authored the book Anti Body-Line, published by Sydney & Melbourne Publishing Company in 1933.

Eric Pitty Barbour passed away on December 7, 1934 at Darlinghurst, Sydney. 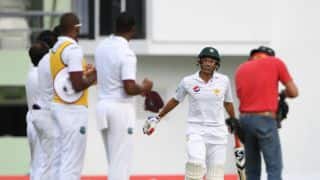