Monday, December 4, 2012 marked the end of an era when Ricky Ponting walked out for the last time in an international match at the fall of Shane Watson’s wicket – a reality not lost on the Western Australian Cricket Association (WACA) crowd as they rose in unison to applaud him. Monday, December 4, 2012 marked the end of an era when Ricky Ponting walked out for the last time in an international match at the fall of Shane Watson’s wicket – a reality not lost on the Western Australian Cricket Association (WACA) crowd as they rose in unison to applaud him. South African captain Graeme Smith gathered his team in a guard of honour and they applauded Ponting to the crease.

At his pomp, Ponting would tear into the opposition after the Australian openers had laid waste the opposition bowling. The 257 runs at Sydney against India and 156 at Old Trafford against England spring immediately to mind. The Old Trafford innings was more circumspect as he was fighting for a draw.

Where there were highs, there were also lows and the Australian cricketing fans might best remember Ponting for only the second captain to have surrendered the Ashes three times for such is England – Australia rivalry. Technically, he just lost it twice and failed to regain it the third time.

In the last few years of his captaincy, he failed to inspire the Australians after the retirement of his long time teammates. Woefully, his form deserted him too and he would appear a mere shadow of his former self.  There were numerous calls for his retirement, but he kept going as he thought he had something to give to the team. And as the last remaining elder statesman, he found it his duty to mentor the younger generation.

That changed last week when he realised he was holding back the team.

One of his best ever moments includes a century in the ODI World Cup final in 2003 where he almost single-handedly crushed the opposition into submission. The unbeaten 140 against India at Johannesburg in 2003, was a punishing innings from which India never recovered.

Ponting was as tough as they come.

The years mellowed him down a little, but he never lost his competitiveness. As many would testify, he was the first one to the training and the last one off even with the ageing body. He brought an uncompromising attitude to the table and always gave and demanded the best.

He commanded respect from all and his exit leaves the game poorer. Ponting is undoubtedly Australia’s second best cricketer ever after Sir Donald Bradman. He leaves behind a legacy as vast as his 17 years in the international arena.

We can expect a new voice in the commentary room soon.

(Dr Amyn Malik is a Fulbright Scholar pursuing MPH at Johns Hopkins Bloomberg School of Public Health who tweets @amynmalik. The above article is reproduced with permission from www. http://tribune.com.pk/) 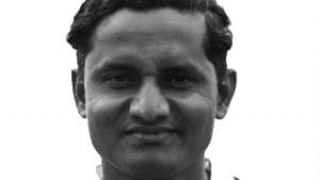