Experiences and craze of cricket fans watching a match outside a shop!

Experiences and craze of cricket fans watching a match outside a shop!

Thousands of cricket fans, unable to watch the teams lock horns at the stadium, had to stick to other options.

Be it the 50-over format or the latest Twenty20 (T20) or the longest format, cricket never ceases to grab attention of the Indian. As the youngest format of the game and the cash-rich tournaments keep the Indian public glued to the television and social media, Sudatta Mukherjee looks around to find out how the Indian cricket fans over the years have enjoyed cricket matches.

Sachin Tendulkar was not alone in his achievements. There were those men, standing outside the electronic shops to catch a glimpse of their heroes on the giant screen. When it poured down, out came the kerchiefs to cover their heads. Someone opened an umbrella. The others clung to him. They erupted in joy with every boundary, and there was a sigh of despair as he walked back.

No, these words are not mine. These lines are an essence of the first stanza of a Joy Goswami poem.

Mumbai Indians (MI) took on Kolkata Knight Riders (KKR) in Indian Premier League (IPL) 2015 on Thursday at the Wankhede Stadium, Mumbai. Thousands of cricket fans, unable to watch the teams lock horns at the stadium, had to stick to other options. As people headed back home from a long day’s work, Mumbai’s batting innings had already kicked off. Despite being tired, people stood in front of electronic shops and restaurants to see their favourite cricketers battle it out to find place in the playoffs. READ: Fans or Rats? The angst of a loyal cricket devotee

We ventured out to ask few cricket fans, who over the years have resorted different options when they were either away from the ground or the television set at home, where they could catch the action live. READ: A family that watches cricket together & cheers together, stays together!

“It is a maddening situation. When you stand outside a shop and watch it with many people anxiously checking out, every move. They criticise. They laugh. They cheer. It is no less than a feeling like stadium,” said a man in his 30s, watching the MI vs KKR tie. READ: Cricket fans feel India lacked Team spirit

“I once saw a match at a pub. Unfortunately turned out to be a bad one as drunkards were all fighting verbally and making groups for teams,” said Hyderabad-based dentist and PhoneRadar senior editor, Chetan Bhawani.

Fellow cricket writer Sonali Dhulap said, “I have watched outside a TV showroom, at a pan-beedi shop, grocery store, at a crowded petrol pump where they had erected a big screen… It’s fun. It can be more enjoyable with more people. The emotions flow collectively – the delight or the despair. Reminds you what you share with people you don’t even know.”

Student of the game, aspiring historian Sarmad Hussain, from all the way from Pakistan said, “Millions of time, depends upon the match situation. Get disgusted at the use of curses by the public. Experiences are aplenty. For example, Misbah-ul-Haq’s 2007 innings at Johannesburg. People were abusing [Shahid] Afridi and criticising Misbah… Then started dancing on [Ravi] Shastri’s demagogy, only to revert to abuse, after the ill-fated scoop. If anything gives legitimacy to William James’ pragmatism, it is the Punjabi cricket fan on the streets.”

Cricket fan Shirsh Roy said, “I think it’s a maddening experience to watch a game of cricket right outside a television shop. Watching it through their glass windows, standing amongst a horde of people and we know how passionate Bengalis are about sports, so the extremely unique, interesting and varying versions of analysis that runs in the background adds a lot of colour. I cherish stopping by every rock er adda for such occasions smile emoticon.”

Die-hard KKR fan Devang Bhandari said, “Outside a electronic store, restaurant, salon amongst other places! Just for the heck of cheering for your team with random people! Nails were bitten, profanities hurled at the opposition but the atmosphere is electric whether the team wins or loses!”

“Back in 2005, I think. It was outside a shop in Kalu Sarai, Hauz Khas. The area is chock full of IIT coaching centres. So many people used to watch. Great atmosphere it used to be. A huge crowd used to gather during India’s matches and a collective eruption of celebration right in the middle of the market was an amazing, wonderful experience. From teachers to small shop owners used to gather and they would curse the shopkeeper if he changed the channel by mistake,” remembers business associate Mohammad Omar.

“Yes I have, many a time. Most recently it was the India vs Pakistan Cricket World Cup 2015 match. Having heard so much about Goa and football, it was a little pleasantly shocking to note that Goans knew their cricket as well! This was a small tea shop right in front of Baga Beach, way more crowded there than the beach for a change, “Narayanan Hariharan, founder of Effect Works, shares his experience.

The cricket fan will find his or her way to watch the game. Nothing can stop him or her. Till the day cricket is alive and entertaining, the fans will keep finding their way to watch a match. 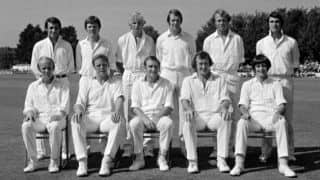