It was a dream debut for West Indian pace sensation Alzarri Joseph in the IPL, as he broke the 11-year-old record of the best-ever figures in the league with a sensational 6/12 in 3.4 overs for Mumbai Indians against Sunrisers Hyderabad in Match 19 of the IPL 2019 at the Rajiv Gandhi International Stadium, Hyderabad on Saturday.

Joseph, who was drafted in the MI setup as a late replacement for injured New Zealand quick Adam Milne, got his first game at the expense of Lasith Malinga, who is back in Sri Lanka to play a domestic tournament. (READ: SRH crumble to Joseph)

Joseph was up for a big task after Mumbai were limited for 136/7, but when he was summoned for his first over, the fifth of the match, SRH s David Warner tried to hit the youngster out of the attack, only to lose his stumps, playing one on to his stumps.

With that perfect start, the Antigua-born bowler grew in confidence and got rid of India international Vijay Shankar for 5 in his second over.

Back for his second spell, Joseph bowled with genuine gas and had two more wickets in his third over, cleaning up Deepak Hooda and then bumping out Rashid Khan. He polished off the tail with two more wickets to become only the third bowler to claim six wickets in an IPL innings after Sohail Tanvir of Pakistan and Adam Zampa of Australia.

In the process, he broke Tanvir s record of the best bowling figures in the IPL (6/14) set in the inaugural edition of the IPL in 2008 for Rajasthan Royals against Chennai Super Kings.

Best figures in the IPL 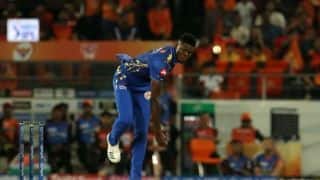 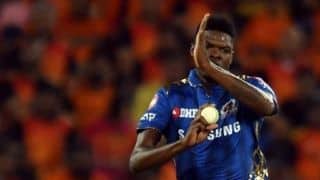