Thus far, he has officiated in 376 matches across the three formats of the game.

Officiating in the second Ashes Test at the Lord s Cricket Ground in London on Thursday, Pakistan s Aleem Dar equalled West Indies Steve Bucknor s record of officiating in the most number of Test matches.

The ongoing England versus Australia Test was the 51-year-old Dar s 128th Test as an umpire.

“It’s a great honour to equal the number of Test matches of my role model, umpire Steve Bucknor,” Dar was quoted as saying in an ICC tweet.

The Bangladesh versus England Test in October 2003 in Dhaka was Dar s first Test match as an umpire. Thus far, he has officiated in 376 matches across the three formats of the game.

While Dar and Bucknor are at the top of the list, Rudi Koertzen of South Africa is on the second spot, having stood in 108 Test matches before he announced his retirement from umpiring in 2010. Koertzen remains only the third umpire to have officiated in more than hundred Tests.

Coming to Lord’s Test, after a washout on the first Day of the second Test, Australia are in the driver’s seat, having ran through the England top and middle-order.

While Nathan Lyon, Peter Siddle and Pat Cummins have scalped a wicket each, Josh Hazlewood, who was picked in the playing XI ahead of Mitchell Starc, has been the pick of the bowler, having taken three wickets – Jason Roy, Joe Root and Joe Denly. 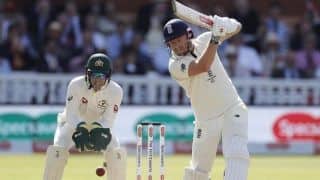