West Indies Chris Gayle surpassed Pakistan s Shahid Afridi as the player with most sixes in international cricket (Tests, ODIs and T20Is combined) during the 1st ODI against England at the Kennington Oval, Bridgetown, Barbados. Afridi hit 476 sixes in all the formats combined, while Gayle with a knock of 135 runs off 129 balls against England took his six-hitting tally to 488 in his 444th international match.

Gayle, who recently announced that he will retire from international cricket after the ICC Cricket World Cup 2019, scored his 24th ODI hundred, which included 12 sixes in the innings on Wednesday.

Before the start of the match, Gayle was tied with Afridi, but surpassed the Pakistan allrounder when the opener hit a maximum off Moeen Ali in the 21st over.

However, Gayle is not the sole leading six-hitter in any single format. The leading six-hitter in Tests is New Zealand s Brendon McCullum with 107 sixes, followed by Australia s Adam Gilchrist with exactly 100 hits over the ropes with Gayle at third. In T20Is, Gayle is the joint-highest with New Zealand s Martin Guptill, closely followed by India s Rohit Sharma with 102 sixes.

In ODIs, Afridi is at the lead by a long margin with 351 sixes in the format, while Gayle is now at 287. Overall, Afridi took 524 matches to hit 476 sixes, while Gayle broke the record in his 444th international match.

Most sixes in international cricket 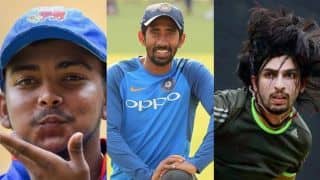