Cricket World Cup 2019: Dimuth Karunaratne becomes second batsman to carry his bat through the innings in

As the New Zealand pacers ran riot and bundled out Sri Lanka for 136 in the third match of the ICC Cricket World Cup 2019 at the Sophia Gardens in Cardiff on Saturday, Dimuth Karunaratne became only the second batsman to carry his bat through the innings in a World Cup match.

The Sri Lankan skipper opened the innings with Lahiru Thirimanne, after Kane Williamson won the toss and put Sri Lanka in to bat.

The left-hander scored an unbeaten 52 from 84 balls, hitting 4 fours. With this, he became only the second batsman after Ridley Jacobs to achieve this feat.

While the Kiwi pacers struck at regular intervals, Karunaratne stayed put and brought up his third ODI fifty. His knock remained the only highlight of Sri Lanka’s performance in this game after the other Sri Lankan batsmen came a cropper against the likes of Matt Henry, Lockie Ferguson, Jimmy Neesham, Mitchell Santner and Trent Boult.

Although the New Zealand openers – Martin Guptill and Colin Munro – took their time to go big, the pair took on the Sri Lankan bowling once they settled in and chased down the 137-run target in 16.1 overs as the Blackcaps sealed a comprehensive ten-wicket win against the Island nation. (Cricket World Cup: New Zealand vs Sri Lanka: AS IT HAPPENED)

While Guptill scored an unbeaten 73 off 51 balls, Munro remained not out on 58 from 47 balls. 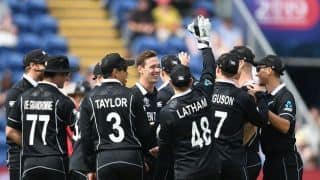