Starc dismissed Jonny Bairstow to etch his name in the record books.

While Jason Roy came out all guns blazing as England looked set to beat Australia in the second semifinal of the ICC Cricket World Cup 2019 at Edgbaston in Birmingham on Thursday, Mitchell Starc etched his name in the record books as he became the highest wicket-taking bowler (27 wickets) in a single edition of the World Cup.

The left-arm pacer, who came in this game with 26 wickets against his name, dismissed Jonny Bairstow to break Glenn McGrath s record. The legendary Australian pacer had scalped 26 wickets during Australia s 2007 World Cup-winning campaign in West Indies.

Starc trapped the England opener before the wickets in the 18th over to break a blistering 124-run opening stand. While Bairstow opted for a review, it did not work in his favour.

Earlier, Australia, who opted to bat, could only score 223 runs as Chris Woakes (3/20), Adil Rashid (3/54) and Jofra Archer (2/32) shared the spoils, scalping eight wickets amongst themselves.

For Australia, Steve Smith top scored with 85, hitting six fours while wicketkeeper Alex Carey, who was hit by an Archer bouncer, scored 46. The two were key to Australia’s recovery after the Aaron Finch-led side was reduced to 14/3 as Woakes dismissed David Warner and Peter Handscomb and Archer removed the Australian skipper Finch for a first-ball duck.

The Carey-Smith stand accounted for 103 runs before Rashid’s twin strikes, dismissing Carey and Marcus Stoinis, denied Australia a chance to put up a formidable total on the board.

Most wickets in a single edition of the World Cup: 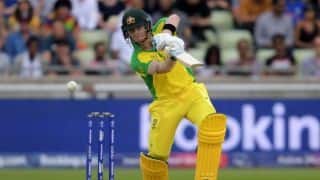