Williamson ended the World Cup 2019 with 578 runs against his name, most for a captain in a single edition of a World Cup.

While which side will win the ICC Cricket World Cup 2019, played at the Lord s Cricket Ground on Sunday is far from clear, Kane Williamson has managed to move to the spot in the list of captains with most runs in a single edition of a World Cup.

The New Zealand skipper, who was tied with Sri Lankan great Mahela Jayawardene with 548 runs against his name during the ICC Cricket World Cup 2007, moved past the right-hander after scoring his first run in the final against the Eoin Morgan-led England side.

While Williamson could not score big after being dismissed for 30 by Liam Plunkett in the 23rd over after the Blackcaps won the toss and elected to bat, he now holds the record of most runs (578) for a captain in a World Cup.

New Zealand, who had beaten India in the first semifinal at the Old Trafford in Manchester, retained the same playing XI which sealed their place in the final. England, too went ahead, fielding the same team which outplayed Australia in the semifinal at Edgbaston in Birmingham on Thursday.

Captains with most runs in a World Cup 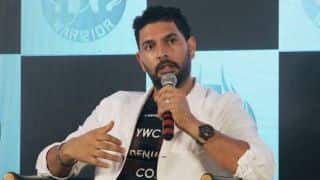