Kohli achieved the feat in his 417th innings, when he reached the score of 37. The record for the fastest 20,000 international runs in cricket was earlier jointly held by Sachin Tendulkar and Brian Lara, who reached the landmark in their 453rd innings, respectively.

The 30-year-old has been in good nick in the tournament, scoring three half-centuries – 82 against Australia, 77 against Pakistan and 67 against Afghanistan – but is yet to reach the triple-figure mark. By reaching 20,000 international runs, Kohli also becomes the 12th batsman overall to reach the landmark and only the the third Indian, after Tendulkar and Rahul Dravid.

Among active cricketers, Kohli is the leading run-getter across all three formats combined, followed by Chris Gayle of West Indies (19186 runs in 524 innings) and Hashim Amla of South Africa (18592 runs in 436 innings). 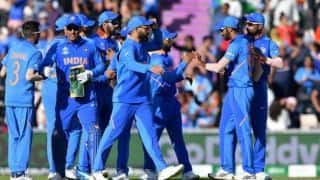