Afghanistan's Hazratullah Zazao became only the sixth player in professional cricket to his six sixes in one over. CricketCountry.com digs in to the archives to bring you the other five instances when a batsman hit six sixes in an over.

Playing for Kabul Zwanan in the Afghanistan Premier League (APL), opener Hazratullah Zazai became only the sixth player in professional cricket to hit six sixes in an over. The 20-year-old achieved the feat en route to a record-equalling 12-ball half-century for Kabul.

In front of the man whose record he drew level with, Chris Gayle, the Afghanistan batsman smacked the left-arm spinner Abdullah Mazari for 37 runs in one over with a wide added to six sixes. Getting to a fifty in 12 balls put him level with Gayle, who smacked 80 earlier in the day to set up Legends win, and Yuvraj Singh.

Zazai is the third player to hit six sixes in an over in T20s, and overall, the six.

On August 31, 1968, Malcolm Nash of Glamorgan bowled the most famous over in the history of First-class cricket. Read the full ball-by-ball analysis of the over.

January 10, 1985. It was on this day Ravi Shastri equaled Garry Sobers s First-Class record of scoring six sixes in a six-ball over and went on to score the fastest-ever double century in First-Class cricket history.

On March 16, 2007, South Africa s Herschelle Gibbs became the first man in the history of international cricket to score six sixes in an over. The unfortunate bowler was Netherlands Daan van Bunge, who finished with figures of 4-0-56-0 after the carnage.

Yuvraj Singh plundered England s Stuart Broad for six sixes in an over that drew parallels with a similar feat by three other batsmen Gary Sobers, Shastri and Gibbs. Yuvraj s unleashed his phenomenal firepower in the 19th over, bowled by Broad.

In 2017, Worcestershire s Ross Whiteley hit six sixes in an over to join a select group who ve performed the feat in senior cricket. Whiteley struck Yorkshire left-arm spinner Karl Carver for six sixes a total of 36 runs during the 16th over of Worcestershire s innings in an English T20 match at Headingley. 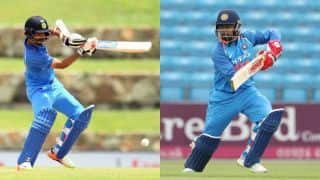