Chahar also became the first Indian to claim a hat-trick in T20I history. Deepak Chahar‘s 6 for 7 saw the Indian pacer record the best figures by any bowler in Twenty20 Internationals, beating Ajantha Mendis’ 6 for 8 v Zimbabwe in 2012. Chahar, who also became the first Indian to claim a hat-trick in T20I history, achieved the feat in the series-deciding third and final Twnety20 International against Bangladesh at Nagpur on Sunday.

Put into bat India made 174/5 in 20 overs with Shreyas Iyer scoring an impressive fifty with his knock of 62 including five huge sixes and three boundaries off Afif Hossain’s bowling. This also included a hat-trick of sixes in just one over.

During the run chase, Bangladesh were electric, but they lost steam as Indian bowlers particularly Chahar and Shivam Dube began to wreak havoc.

Chahar struck as early as the third over dismissing Liton Das for 9. He then gave marching orders to Soumya Sarkar, who returned without troubling the scorers. He completed his hat-trick in the 18th over when he first dismissed Shafiul Islam for 8 and then completed his hat-trick with the other two wickets of Mustafizur Rahman (1) and Aminul Islam (9) to see the hosts to a sensational 30-run win. 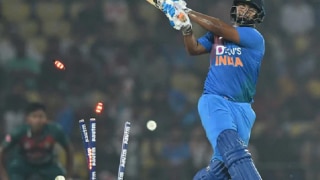