Kohli now needs to score 459 runs more to surpass Rahul Dravid and grab the ninth spot in the list.

Virat Kohli missed out on a chance to bring up his 49th ODI fifty as India beat New Zealand by eight wickets in the first ODI in Napier on Wednesday. However, the Indian skipper continued his record-breaking spree as he went past West Indian great Brian Lara s ODI run tally to enter the top ten in the list of the leading run-getters. (ALSO READ: India vs New Zealand, 1st ODI: FULL SCORECARD)

Kohli now has 10430 runs in ODI cricket, 25 more than Lara. Kohli, who was playing his 220th ODI, was 21 runs behind as India began their chase of the New Zealand s total. The right-hander scored 45 off 59 balls at the McLean Park and made his way into a special list, which is topped by Sachin Tendulkar, who has 18426 runs against his name. (ALSO READ: Virat Kohli happy with most balanced performance )

Kohli now needs to score 459 runs more to surpass Dravid and grab the ninth spot in the list. Another Indian cricket who is in the race to go past Dravid s tally of ODI runs is the former skipper MS Dhoni, who has 10366 runs against his name, 64 runs less than the man who succeeded him as Team India skipper.

Coming back to the five-match ODI series opener, Indian bowlers Mohammed Shami (3/19), Kuldeep Yadav (4/39) and Yuzvendra Chahal (2/43) denied the Kane Williamson-led New Zealand a chance to put up a big total as the hosts were dismissed for 157 in 38 overs. (ALSO READ: We need to be better, this wasn t our best effort: Kane Williamson)

The game was stopped due to excessive sunshine and India were asked to chase 156 runs in 49 overs, the visitors broke hardly any sweat as they won the game with 85 balls to spare. Shikhar Dhawan scored an impressive 75 (not out) as India took 1-0 lead in the series. (ALSO READ: Shikhar Dhawan is second fastest Indian to 5000 ODI runs) 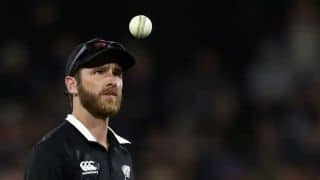