New Zealand pacer Trent Boult put India on the mat in the fourth ODI in Hamilton with a brutal spell that left the world's no. 2 team tottering.

New Zealand pacer Trent Boult put India on the mat in the fourth ODI in Hamilton with a brutal spell that left the world’s no. 2 team tottering. (ALSO READ: India subside to seventh-lowest total of all time)

With the series already in the grasp of India who did that by clinching wins in the first three matches, New Zealand had little to lose and much to gain from the remaining two rubbers.

Boult made full use of helpful conditions as he left the Indian team searching for answers against the moving ball. He ran through their batting line-up like a hot knife through butter.

His first two over went quietly and he started weaving his magic in the innings sixth over when he pinned opener Shikhar Dhawan in front for 13. That opened the floodgates as he quickly got rid of captain Rohit Sharma, taking a sharp catch off his own bowling. He was in an unforgiving mood and not even spared teenage debutant Shubman Gill who copped a blow to his helmet and needed the attention of team physio. He would also end up falling to the left-arm pacer, almost a similar dismissal to that of his skipper caught and bowled.

He later also accounted for the scalps of Kedar Jadhav (1) and then Hardik Pandya (16) in this final over to round of a devastating spell of pace bowling.

He thus equalled the record for the most five-wicket hauls in ODI cricket by a New Zealand bowler. It was his fifth fifer in 75 ODIs while Hadlee took 115 matches to do that.

Most fifer by a NZ bowler in ODIs

Overall, the record his held by Waqar Younis

Boult’s figures are also the second best in the format for his country against India.

India eventually were rolled over for 92 in 30.5 overs their seventh lowest in ODIs. 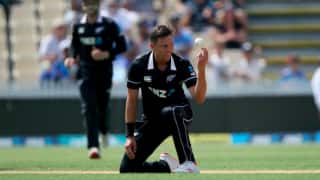 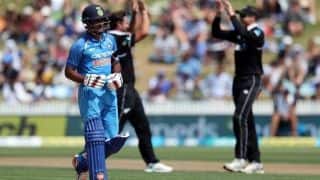