Rohit Sharma is on the brink of owning a T20 record to be proud of. Rohit, India’s vice-captain, is only two sixes away from overtaking Chris Gayle as the player with the maximum numbers of sixes in T20 internationals when India and West Indies meet for the second T2oI in Lauderhull, Florida on Sunday.

Rohit currently has scored 104 sixes in 94 T20I, while Gayle has one more 105 from 58. Provided Rohit sends two more boundaries over the ropes, he will become the kind of big ones in the shortest format of the game. Rohit started the series with four blows away, two of which he connected in the first T20I Saturday before being dismissed by Sunil Narine for 24 off 25 balls.

Gayle has been rested for the T20Is and with uncertainty surrounding his career, he may no longer get the opportunity to again be at the pinnacle of six hitting in T20Is. Gayle, however will play the subsequent ODI series, which also is expected to be his final appearance in the 50-over format after he reversed his decision to retire from ODIs at the end of the World Cup.

If Rohit gets there, he will be the proud owner of yet another T20 record since he already is the highest run-scorer in T20 internationals. Rohit has amassed 2355 runs in 87 innings with four centuries and 16 fifties, making him the leader of the pack. Next to him is his captain Virat Kohli who has 2282 runs from 63 times he’s batted.

In terms of sixes, after Rohit and Gayle, Martin Guptill has hit 103 sixes, followed by his New Zealand teammate Colin Munro 92. 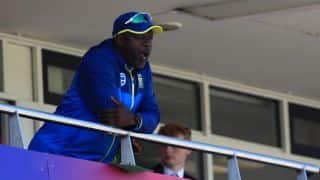