Harbhajan Singh joined the likes of Lasith Malinga, Amit Mishra and Piyush Chawala as he came the fourth bowler to take 150 or more IPL wickets.

As Chennai Super Kings (CSK) restricted Delhi Capitals (DC) to 147/9 in the Qualifier 2 of the Indian Premier League (IPL) 2019 at the Dr YS Rajasekhara Reddy ACA-VDCA Cricket Stadium in Visakhapatnam on Friday, Harbhajan Singh became only the fourth bowler to take 150 or more wickets in IPL.

The veteran Indian off-spinner scalped two wickets – Shikhar Dhawan and Sherfane Rutherford – as he joined the likes of Lasith Malinga (169 wickets), Amit Mishra (156 wickets) and Piyush Chawla (150 wickets) in the list of bowlers who have reached the landmark.

Harbhajan scalped his first wicket of the match when he dismissed Dhawan in the final over of the powerplay after MS Dhoni did a fine job behind the wickets, taking a sharp catch on the second attempt.

Harbhajan, who had bowled his three overs in the first ten overs of the DC innings, then returned to bowl his final over in the 16th over and scalped his second wicket of the game and 150th wicket in the IPL as he sent another left-hander, Rutherford, as Shane Watson took a catch. (IPL 2019, Qualifier 2 CSK vs DC: FOLLOW LATEST UPDATES)

While Bhajji scalped two wickets, the likes of Dwayne Bravo, Imran Tahir and Ravindra Jadeja too scalped as many wickets as CSK, who opted to field, kept their hopes of making it to IPL 2019 alive.

If they win tonight, the Dhoni-led unit will square off against Mumbai Indians (MI), which happens to be Harbhajan’s previous franchise, in the final which will take place at the Rajiv Gandhi International Stadium in Hyderabad on May 12 on Sunday.

Bowlers with 150 or more wickets in IPL: 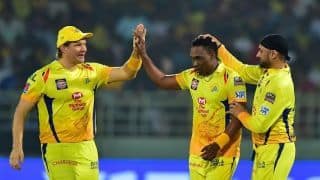