Chennai s Suresh Raina became the first player in the Indian T20 League to complete 5000 runs during the season opener of the 12th edition against Bangalore at the MA Chidambaram Stadium, Chennai on Saturday.

Needing 15 runs to complete the milestone, the India international found himself in the middle as early as the 3rd over; after Shane Watson departed for a ten-ball duck to Yuzvendra Chahal.

He reached the milestone in his 177th Indian T20 League match when he took a single in the 9th over of Chennai s innings. He eventually departed for 19. The left-hander has representing Chennai and the Gujarat franchise, when the former was suspended for two years. Only twice has Raina scored less than 400 runs in a single season and this pretty much tells you why he continues to top the chart.

The allrounder, who has been a regular feature for three-time champions Chennai has scored 841 came when he played for Gujarat for two seasons. Second on the list of all-time leading run-getters in the league is India and Bangalore skipper Virat Kohli with 4954 runs in 164 matches at 38.10. In today s game the skipper could only manage six runs.

Most runs in Indian T20 League 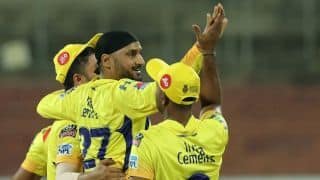