Rohit Paudel has become the youngest player in men's international cricket to hit a half-century.

Nepal’s Rohit Paudel on Saturday rewrote history when he became the youngest player in men’s international cricket to hit a half-century surpassing the likes of batting legends Sachin Tendulkar and Shahid Afridi.

Rohit, at 16 years and 146 days, top-scored for Nepal with 55 off 58 against UAE in the ongoing ODI series at ICC Academy in Dubai. He thus overtook the long-standing record held by Tendulkar who achieved the feat aged 16 years and 213 days in a Test against Pakistan. The record stood for just over 29 years.

Afridi held the record in ODI cricket en route to his legendary 37-ball century when he was just 16 years and 217 days old against Sri Lanka.

Overall, the record is held by South Africa Women’s Johmari Logtenburg who hit fifties in Test and ODIs aged 14.

Thanks to his half-century and opener Gyanendra Malla’s 44, Nepal posted a decent 242/9 against. Amir Hayat and Imran Haider picked three wickets each for the hosts. Paudel struck seven fours during his innings.

In reply, UAE crumbled to Sompal Kami and Sandeep Lamichhane to be shot out for 97 in 19.3 overs. Only four of their batsmen managed scores in double-digits and none crossed 26. Five of them failed to open their account with Muhammad Usman top-scoring for UAE, hitting 26 off 39 with four fours and a six. Nepal thus registered a massive 145-run win. 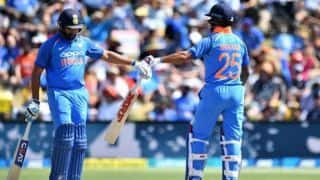