R Ashwin completed his 27th five-wicket haul as India managed to secure a first-innings lead over South Africa in the first Test of the three-match series at the Dr. Y.S. Rajasekhara Reddy ACA-VDCA Cricket Stadium in Visakhapatnam on Saturday.

The Indian off-spinner now has 349 Test wickets and a wicket away from equalling Sri Lanka legend Muttiah Muralitharan’s record in the longest format of the game.

Ashwin, who returned with the figures of 7/145 in the first innings, helped India bowl out South Africa for 431 as the hometeam, who had scored 502/7 declared, secured a 71-run lead.

Ashwin, who was playing his first international game since December 2018, now just one wicket away from becoming the joint-fastest to take 350 wickets in Test cricket.

The 33-year-old currently has 349 wickets against his name from 66 Test matches. And if he picks up a wicket, he will equal Muralithran who too had scalped 350 wickets in 66 Tests when Sri Lanka faced Bangladesh in 2001.

The Sri Lankan holds the record of most wickets in Test cricket, having scalped 800 wickets.

Ashwin, who made his debut in Test cricket in 2011, was not picked in India’s playing XI in the two-match Test series against West Indies in the Caribbean. India had opted for Ravindra Jadeja ahead of Ashwin as the lone frontline spinner.

However, Ashwin returned with a bang as India look to win their first Test during the homeseason and strengthened their position in the ICC World Test Championship. 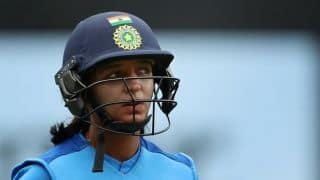