Leading the way for Rajasthan was Aniket Choudhary who claimed 5/11 in seven overs.

Group C leaders Rajasthan have kept Tripura to their lowest total in first-class cricket – 35/9 – during their ninth round 2018-19 Ranji Trophy fixture.

The team s nadir came Monday at the MBB Stadium in Agartala where they were dismissed in 18.5 overs, with the captain Smit Patel retired hurt earlier in the morning.

Six batsmen failed to score, and only Neelambuj Vats, with 11 not out, got into double-figures. There were six extras. Leading the way for Rajasthan was seam bowler Aniket Choudhary who claimed 5/11 in seven overs, with support from Tanveer-ul-Haq s figures of 4.5-4-1-3.

These are Choudhary’s best figures in first-class cricket. As far as lowest totals in the Ranji Trophy go, this total of 35 is the joint 12th lowest ever.

Before today, Tripura s lowest total was the 42 they recorded against Bengal in the 1995-96 season at Agartala s Polytechnic Institute Ground. On that occasion, the hosts second innings, following-on after they were bowled out for 53, spanned 29.3 overs and featured four ducks and a highest score of 15 from the No 9, Pawan Kumar.

That dismal total came after Tripura were bowled out for 53 in 21.2 overs in their first innings as Prabir Acharya, the left-arm spinner, with career-best figures of 9-5-6-7. Acharya claimed 4/10 from 12.3 overs as Tripura were skittled for 42 to lose by an innings and 351 runs.

In stark contrast, Bengal had stacked up 446/4 declared, featuring a double-hundred (213) from the former Test opener Devang Gandhi. 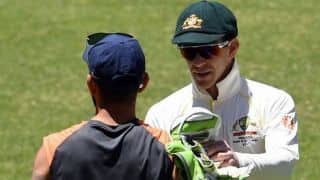