Rohit Sharma on Sunday overtook Sachin Tendulkar as the batsman with most number of 150 plus scores in ODI cricket.

Rohit Sharma on Sunday overtook Sachin Tendulkar and David Warner as the batsman with most number of 150 plus scores in ODI cricket. Both Tendulkar and Warner have five such scores while with his unbeaten 152 off 117 against West Indies in Guwahati, Rohit overtook the duo, recording sixth such score.

Rohit recorded his 20th century in ODIs as together with captain Virat Kohli (140), he steered India’s chase of 323 as the hosts won with 47 deliveries to spare and take a 1-0 lead in the five-match ODI series.

Rohit has also scored three double-centuries in ODIs, the most by any batsman in history. He also holds the record for the highest individual score in the format – 264 against Sri Lanka in 2014. His other two double-tons were against Australia (209) and Sri Lanka (208*).

Kohli scored 140 and during his knock, he crossed 2000 runs in a calendar year for the fifth time in his career. This is the fifth time he has achieved the milestone in his career drawing level with Tendulkar and Mahela Jayawardene at second spot. Kumar Sangakkara leads this list having done this six times during his career. The century was Kohli’s 14th as captain in ODIs and he’s just behind Austalian great Ricky Ponting (22) now.

Rohit and Kohli were involved in a 246-run stand which is the highest for any wicket for India against West Indies. 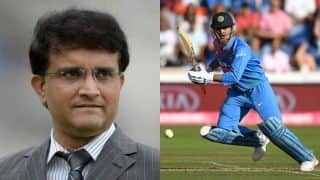