Opening for the first time in Tests, Rohit slammed his fourth ton during the first innings at Visakhapatnam against the touring South African side.

Sidhu had struck eight sixes at Lucknow in 1994 against Sri Lanka, a record which lasted for 25 long years. Opening for the first time in Tests, Rohit registered his fourth century in the first innings at Visakhapatnam against South Africa, in which he hit 176 runs with the help of six sixes.

He followed it with a half-century in the second, during which he hit offspinner Dane Piedt into the side screen. It was the third time he cleared the rope in the innings, taking his match tally to nine sixes.

Most sixes in a Test match for India

Rohit also became the only cricketer to hit seven consecutive Test fifties on home soil. He holds the record for hitting the most sixes for India in a single match (Tests, T20Is, ODIs). Besides, Rohit also has the most runs by a player opening for the first time in a Test. Currently, he has 226 runs, going past Kepler Wessell’s tally of 208 runs against England in Brisbane 1982.

50+ score in most consecutive Test innings in India

In the second innings, with a lead of 71 runs on Day 4, Rohit looked to get quick runs. He got off to a good start even though Mayank Agarwal departed for seven runs.

Earlier on Day 4, India required 13 overs to wipe off the South Africa tail but it wasn’t before their last three batsmen had ensured the deficit was less than that of 100. South Africa’s last-wicket pair of Senuran Muthusamy and Kagiso Rabada entertained with a 35-runs stand, getting the total to cross 400.

Offspinner R Ashwin grabbed the final two wickets of the day to finish with 7/145, one shy of 350 wickets to halt South Africa for 431 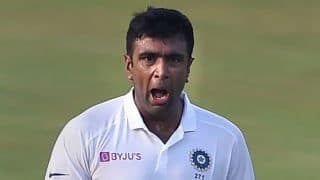 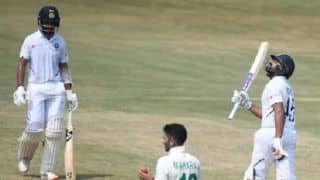