The 36-year-old speedster went on to complete a hat-trick and took four wickets in four balls.

Sri Lanka‘s Lasith Malinga Friday wreaked havoc after becoming the first bowler in Twenty20 internationals to claim 100 wickets as he struck four times with four balls in the third match against New Zealand.

Malinga, who surpassed Pakistan spinner Shahid Afridi’s tally of 97 scalps to become the leading T20 wicket-taker on Sunday, bowled Colin Munro for 12 to claim a century of wickets in his 76th match.

The 36-year-old speedster went on to complete a hat-trick and took four wickets in four balls. Hamish Rutherford, Colin de Grandhomme and Ross Taylor followed Munro to the pavilion.

Malinga, who once achieved a similar feat in the 2007 50-over World Cup in South Africa, also took the wicket of Tim Seifert, for eight, to register a five-wicket haul and take his T20 tally to 104.

The veteran speedster, who retired from Test cricket in 2011 and played his farewell one-day international in July, has competition from Bangladesh’s Shakib Al Hasan who has 88 wickets.

Malinga, known for bowling yorkers with his slinging action, made his T20 debut against England in 2006. He has 101 wickets from 30 Tests and 338 scalps in 226 ODI games. 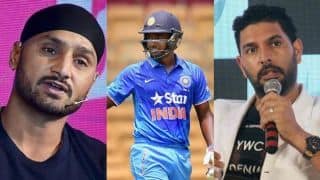 Yuvraj takes a cheeky dig at India’s no.4 woes in ODIs after Harbhajan backs Samson for the role