Pakistan leg spinner Yasir Shah became the first bowler since Anil Kumble in 1999 to claim ten wickets in a day when he removed New Zealand skipper Kane Williamson in the second innings, caught behind for 30. He had removed opener Jeet Raval, stumped before tea on day three. He becomes the first Pakistan bowler to take 10 wickets in a day in Test matches.

Shah had wreaked havoc earlier in the day claiming career-best 8/41 in New Zealand s first innings that was the visitors implode from 50/0 to 90 all out 13.5 overs.

Kumble had claimed ten wickets – all in one innings – against Pakistan at the Feroz Shah Kotla in 1999, becoming only the second player in the history of the game to take ten wickets in an innings after England s Jim Laker in 1956. The off spinner claimed 19 wickets in the match against Australia.

Shah s record haul in 12.3 overs is now the second best analysis by a Pakistan spinner behind Abdul Qadir s 9/56 versus England in 1987. Shah has become the third Pakistan spinner to manage eight wickets in a Test innings, joining Qadir and Saqlain Mushtaq who in 2000 took 8/164 against England in Lahore.

His figures are also the best by a Pakistan spinner against New Zealand in Tests, surpassing the 7/52 that Intikhab Alam claimed in 1973. 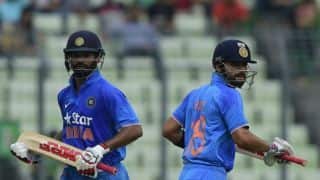