South Africa have found a readymade replacement for Jacques Kallis in the stoic 30-year old.

Faf du Plessis waged a lone battle in the fifth One-Day International (ODI) of the Zimbabwe Triangular Series between Australia and South Africa. He scored 126 out of South Africa’s total of 220, and in doing so recorded two centuries in two games against Australia. Shiamak Unwalla looks at the man whose grit and determination make him an ideal No 3 for South Africa.

Hashim Amla is more stylish; JP Duminy more flamboyant; AB de Villiers more inventive; but in terms of fortitude and will, few South African batsmen can touch Francois du Plessis. His childhood friendship with perhaps the more naturally talented de Villiers is well known, but while de Villiers is a seasoned veteran at 30, du Plessis is just four years into his international career.

In those three years, however, he has shown a fondness for scoring crucial runs when the chips are down. His tremendous Test debut — against Australia at Adelaide — was proof enough of the powers of concentration he possessed. In ODIs, though, he had not yet found his footing.

In the 47 ODIs he had played prior to setting foot on Zimbabwean soil, he had managed a mere seven half-centuries without ever making it to triple-figures. In the six matches that followed, du Plessis has scored 401 runs at an average of nearly 67 with two fifties and two terrific tons.

After Jacques Kallis’ retirement, it seemed that South Africa might have had to experiment with whom to use at No 3. They are lucky that du Plessis has fit the profile so flawlessly. It should be noted that du Plessis has batted in the middle and lower-middle order for most of his ODI career. However, he has thrived on the added responsibility, and as his two centuries have shown, he possesses the required temperament to bat for long periods and hold the innings together.

With a top order reading Amla, Quinton de Kock, du Plessis, and de Villiers, South Africa are possibly among the best batting sides in the world at the moment. If their top four batsmen continue in the vein of form they are currently in, 2015 could well be the year their World Cup drought is quenched. 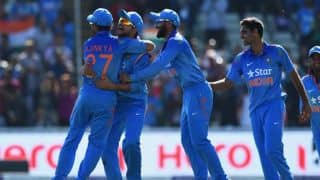