Pakistan cricket is unfair business. In the heartless, yet beautiful world of Pakistan cricket, certain players like Imran Farhat make comebacks after comebacks. On the other hand, a forgotten and unappreciated Karachi born cricketer waits patiently in the dark. 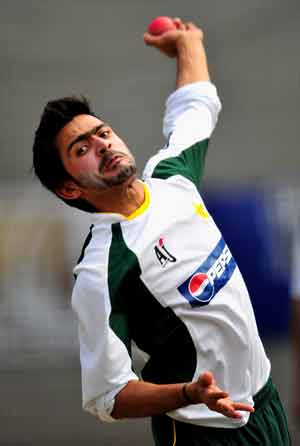 Fawad Alam is a good part time bowler to have on the team. In his List A career, he has 51 wickets from 101 matches with an economy rate of five © Getty Images

Pakistan cricket is unfair business. In the heartless, yet beautiful world of Pakistan cricket, certain players like Imran Farhat make comebacks after comebacks. On the other hand, a forgotten and unappreciated Karachi born cricketer waits patiently in the dark.

He is a man of few words. He wants his performances to do the talking. Patiently knocking on closed doors for the past four years, is Fawad Alam.

Since playing his last match in 2009, Fawad has been at the receiving end of harsh treatment by the selectors. One wonders what the guy has done wrong.

Fawad’s record to date is impeccable. He has a batting average of almost 38 in 27 ODIs and 42 in the three Tests that he has played in – figures that are second only to Misbah-ul-Haq and Nasir Jamshed. Not just that, he has a brilliant record in First-Class cricket. He has a whopping batting average of 56 with 19 centuries and 38 fifties, better than any other batsman in the Pakistan team right now. In his List A career, he has an average of 44. Apparently this record is not good enough to get into our stellar and super-consistent batting line-up.

Fawad is a handy slow left-arm orthodox bowler as well. He is a good part time bowler to have on the team. As his performances in the national team are not enough to make a case, let’s take a look at his domestic record. In his List A career, he has 51 wickets from 101 matches with an economy rate of five. Not bad at all for a part timer, right?

The 27-year-old is also an excellent fielder. He regularly fielded at point for Pakistan when he played, a position that a captain often entrusts upon his best fielder. His catch in the Bangladesh Premier League at the cover boundary will remain sound in any cricket lover’s memory; so will his sharp and sneaky work to run out Shane Watson at the MCG. His fitness has never been a problem.

All his credentials aside, it is a common perception that Fawad Alam has been given a fair amount of chances. However, I believe, no one knew how to utilise him. In his short career, Alam played under four different captains, and it seemed as if each of them had a different plan for him. He batted in every position from No 5 to No 9 in the ODIs. It is a similar story in the T20s. Shockingly, in the 24 T20 Internationals (T20Is) that he has played, he has managed an average of 17.64 and bowled at an average of 11.88! Fair amount of chances? I doubt it.

His critics point out, and rightly so, his lack of match-winning ability. Yes, Fawad Alam is no Shahid Afridi. He cannot hit the ball as hard and long as the pinch hitters of today. However, this brings me back to my point of utilising him well. Each position in the line-up has a role and Alam should be played at a role that suits him best. He is a steady timer of the ball, who can knock the ball around for singles. If Asad Shafiq does not perform well, instead of reverting to Shoaib Malik, Fawad Alam should be brought in and given that chance to perform.

When the time calls for it, Fawad Alam has played important knocks for Pakistan. His best T20 performance came against Sri Lanka where he dispatched the Sri Lankan bowlers for 23 off just eight balls. Interestingly in that match, this cricketer batted at No 9.

Alam is a very solid, utility cricketer. If the selectors can give tried and tested players, with half as many good performances as Fawad, chances to redeem themselves, surely he deserves another chance too. If used wisely, who knows, maybe the athletic Karachiite can make his mark in the international arena as well.

(Zain Abid is currently studying at Lahore University of Management Sciences. The above article has been reproduced with permission from http://tribune.com.pk/)

Mohammad Ashraful: The Bangladeshi enigma who could have done a lot more