In our previous instalment we had read about the first Tests played by Australia, England (the same Test, basically), and South Africa. South Africa never played Australia till 1902-03, so despite it being a three-way contest, England featured in every Test series in the 19th century. In fact, in 1891-92, England sent two different squads to Australia and South Africa at the same time and the Tests almost overlapped.

But things changed in 1905-06. Bernard Bosanquet had already made the googly popular. Now Reggie Schwarz, Bosanquet s colleague at Middlesex, learnt the trade and exported it to South Africa. When England came down to South Africa, they had Schwarz, Aubrey Faulkner, and Bert Vogler (and the part-time Gordon White) all bowling googly. England were felled 1-4 by their own weapon.

The gap was closing. There were no longer only two teams. Influenced by Abe Bailey, the Imperial Cricket Conference (that was what ICC used to be called) took a major decision in 1909. Two meetings were held, on June 15 and July 10, and the ICC announced their first FTP, till 1916-17. This included two triangular tournaments in 1912 and 1916, both in England.

Unfortunately, the triangular tournament failed spectacularly, mostly due to a ridiculously wet summer and South Africa s humiliating capitulation. There would not be another one till the end of the century. And then The Great War intervened.

But in between all this, the West Indians themselves toured England in 1900 and 1906. Both squads were dominated by whites, though blacks especially bowlers had decent representation. The players had enough impact on the Englishmen. One man who featured in both tours was Lebrun Constantine. His son Learie would move on to things beyond cricket with time.

It was evident that there was a fourth force in the world to reckon with. In 1926, ICC allowed delegates from West Indies, New Zealand, and India to attend. It was decided that three teams would play Test cricket in the six years that followed.

West Indies were the first of the three, in 1928. Keeping up with the regionalism that would plague West Indian cricket for years, Jamaica, British Guiana, and Trinidad had four representatives each while Barbados had five.

Karl Nunes led West Indies in their first Test, at Lord s, against a strong outfit. Learie Constantine took 4 wickets, but nine Englishmen reached double-figures (Ernest Tyldesley got a hundred) in a score of 401.

The tourists had no answer to an attack comprising of Harold Larwood (still young), Maurice Tate (still in his peak), Tich Freeman (arguably the greatest bowler in First-Class cricket), and Vallance Jupp, with a youngster called Wally Hammond also rolling his arm over. They were swept aside, for 177 and 166 (44 for 6 at one stage), early on the third morning.

It was a poor outing: in the 36 matches they played the West Indians won 7 and lost 12. They also lost all three Tests by an innings. Tours of English cricketers in the West Indies since that time suggested such progress at the game in that part of the world that the programme arranged for the men led by R. K. Nunes included three encounters with the full strength of England. Unhappily expectations were rudely shattered, concluded Wisden.

That would change, and change soon. They would soon draw against England at home, and win a Test in Australia; and after World War II, beat England and India home and away. Less than half a century since their first Test they would rule the world of cricket.

English teams had made detours of New Zealand several times when they visited Australia, five times before The Great War. Australia paid them visits as well, in 1877-78 and 1880-81.

The first significant tour after The Great War was in England, in 1927. As mentioned above, by that time it was already decided that New Zealand would be inducted into the Test world, but they needed to demonstrate their abilities in front of the English crowd. They played 26 First-Class matches, of which they won 7 and lost 5. Of the 12 Second-Class matches they won 6 and lost none.

It was an impressive start. With scarcely an exception they played an enterprising game and in most instances made their runs in a style which told of intelligent coaching, was the Wisden verdict. Strangely, their fielding was criticised: that complaint would not recur as the decades would roll on.

England decided to send two teams in 1929-30, to West Indies and New Zealand. As we had seen earlier, they had done this before, in 1891-92, when they had sent separate squads to Australia and South Africa. However, there had been no overlap in the Tests on that occasion.

This time things were different. The Bridgetown Test started on the second day of the Christchurch Test (New Zealand s first), which meant that England were playing two simultaneous Tests. Similarly, the Auckland Test coincided with one at Georgetown.

This obviously meant several Test aspirants were called up by England. There were also some recalls. Wilfred Rhodes, for example, toured West Indies with Freddie Calthorpe s men. He played his last Test at 52 years 165 days, still a world record.

New Zealand had an excellent start to their Test career . They were outplayed in their first Test, but drew the other 3 Tests of the series. Granted, they were playing at home (unlike West Indies) and this was a second-string England side (a dozen, no less, of them debuted in the series), but it was a magnificent performance nevertheless.

In the second Test, at Wellington, they led England by 120 and actually declared, setting a target of 287. England finished on 107 for 4. Only one day s play was possible in the third, at Auckland, so a fourth Test was arranged at the same venue. England scored 540 and bowled out New Zealand for 387. Then New Zealand hit back, and England were 22 for 3 when time ran out.

But let us come back to the first Test. After Tom Lowry, New Zealand s first captain, opted to bat first, the hosts lost quick wickets. Then Roger Blunt joined Stewie Dempster, the first outstanding batsman in New Zealand history (he finished with an average of 65.72). The score reached 20 for 3.

Then debutant Maurice Allom bowled one of the most famous overs in history. Roger Blunt survived a leg-before appeal off the first ball and ran a leg-bye. Dempster was bowled second ball. Lowry, next man in, played and missed, and was trapped leg-before second ball. With the last two balls of the over Lowry had Ken James caught and Ted Badcock bowled. Not only did Maurice take a hat-trick, he also became the first to take 4 wickets in 5 balls in Test history.

As has often been the case, the New Zealand lower order fought back. From 21 for 3 they reached 112. Then their left-arm seamer Matt Henderson made history, removing Eddie Dawson with his first ball in Test cricket. From 113 for 3 England reached only 181, but there was no fairytale for the hosts. They were bowled out for 131 and lost by 8 wickets.

We have discussed early Anglo-Indian cricket relationships in detail in these pages. The first mention of cricket in India dates back to 1721, though the sport really became popular among Indians in the late 1800s. The Parsees were the first Indians to take to the sport. They made two tours of England, in 1886 and 1888.

The Parsees won a match against GF Vernon s team that toured India in 1889-90. The Bombay Presidency Match of 1892-93, between Europeans and Parsees at Bombay, was the first in India to be given First-Class status. The Parsees won the return match at Poona, thus being the inaugural champions. With the advent of the Hindus, Muslims, and The Rest, the contest later expanded to the Bombay Pentangular.

In between all this, a squad of Indians toured England under the Maharaja of Patiala. They lost their first 11 matches, but of their last 12 they won 6 and lost 4.

Everything aside, the tour is remembered for Palwankar Baloo. A Dalit (untouchable), Baloo played for the Hindus on the insistence of Europeans. He was made to eat and drink outside the dressing-room on inferior utensils in matches in India.

Nevertheless, he bowled left-arm spin, and could turn the ball either way. So good was he that he had to be picked for the tour, along with his brother Palwankar Shivram. His 114 wickets came at under 19. In First-Class matches alone he had 75, at 20; nobody else got even 50.

Back in India, cricket resumed after The Great War, but things really took off after Arthur Gilligan s unsuspecting men ran into CK Nayudu at Bombay Gymkhana in 1926-27. His 116-minute 153 included 11 sixes. So awestruck was Gilligan that he recommended India for Test status.

Five years later a motley crew of Indians landed on the British shores. Unlike the Australians, South Africans, West Indians, and New Zealanders, there was no white cricketer in the squad: there were seven Hindus, four Muslims, four Parsees, and two Sikhs every single one of Indian origin. But that was not all: two of their finest cricketers at that point, KS Duleepsinhji and The Nawab of Pataudi Sr, had opted not to play.

The Indians did quite well, winning 9 and losing 8 matches out of 26 First-Class matches. If one includes Second-Class matches the count read 13:9. Wisden summarised that they acquitted themselves on the whole, if not with marked distinction, at any rate with great credit The tour proved of immense value to the Indians themselves who, about the middle of the summer, were fifty per cent better than when they arrived. One wonders what they would have achieved had Duleep and Pataudi played for them.

The Maharaja of Porbandar, an incredibly incompetent cricketer, led the side. Thankfully, he had the sense of not playing the Test, as did KS Limbdi, Porbandar s vice-captain (and brother-in-law). That honour was rightfully bestowed upon Nayudu.

Nine days before the Test, Herbert Sutcliffe and Percy Holmes had added a world-record 555 for the opening wicket. They received an unpleasant surprise: first Mohammad Nissar hit Sutcliffe s leg-stump and sent Holmes off-stump flying; and Lall Singh provided a glimpse of brilliance in running out Frank Woolley. England had been reduced to 19 for 3 after half an hour s cricket.

England managed only 259. India stood firm against Bill Bowes and Bill Voce, even reaching 110 for 2. But that was all. They were bowled out for 189. Then England set them 346 and bowled them out for 187.

Fifty-one years later, on the same day as their first Test had started (June 25), India would lift their first World Cup at the same ground. In another thirty years they would stamp their authority firmly on the financials of the sport. 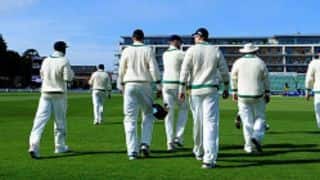