The ‘Bangla-Tigers’ continued their domination in the One-Day International (ODI) format as they outplayed South Africa in back to back games and won fourth successive series at home on Wednesday. Sandipan Banerjee points out five game changing moments which left the Proteas clueless in the 3rd ODI.

Lack of resistance from the South African top order:  South Africa and Bangladesh, both teams came into this game with the series levelled at 1-1. So there were plenty to play for. In the last match, South African batting failed miserably. So in this series decider it was expected there will be more resistance from the Proteas top order. To not put their batting under the pressure of a run chase, South African skipper Hashim Amla won the toss and decided to bat, despite of knowing the rain threats later in the game. But it turned out to be a completely different story. There were no fight form the top order and at one point of time South Africa were tottering at 50 for four in the 16th over. ALSO READ: Tamim Iqbal steps up to help Bangladesh complete treble

Irresponsible shot selection by the Proteas batsmen: Most of the South African batsmen threw their wickets away after playing irresponsible shots. The wickets of Quinton de Kock, Faf du Plessis are the prime examples of this. De Kock was the first batsman to get out for South Africa. He got out in third over of the match when the southpaw tried to play a full ball of Mustafizur Rahman, tailing onto his leg-stump but failed to connect. The ball sneaked past the bat and crashed into the leg stump. Faf du Plessis soon followed him tried to play an expensive shot against Shakib but failed to connect it properly. Mushfiqur Rahim completed the rest of work by taking the high catch quite easily. These shots were not needed. They could have taken more time and assessed the wicket before going to these shots. ALSO READ: Mashrafe Mortaza requests Bangladesh Prime Minister for national holiday following historic victory

Shakib’s day out with ball: Shakib al Hasan had an excellent day with ball in hand. He was given the ball in the sixth over of the game against du Plessis and Amla. Shakib did the job brilliantly. He was giving the ball some air and asking the batters to come forward and drive him. The ball also gripped the surface and spun. The turn in the wicket resulted the wickets of Du Plessis and Amla. The wicket of Amla also took Shakib to 200 ODI wicket. He later came back for his last spell and took the wicket of Farhaan Behardien. Shakib finished with the figure of 3 for 33.

The rain effect: During the South African innings, a heavy shower halted play for almost three hours. South Africa were 78 for four in 23 overs when the covers were brought in. It rained quite heavily. At one point of time it even looked that the match would be abundant. But the rain did stop and play resumed, thanks to the excellent drainage system of the ground. But this break didn’t help the South Africans. The match was reduced to 40 overs, amongst which 23 overs were already bowled. So there were less time left for the like of David Miller and JP Duminy to take South Africa to a respectable score. Also due to the heavy rain, the outfield quite wet when the play resumed. The ball was getting wet and during the Bangladesh innings, the wet ball didn’t help the Proteas pacers or spinners. READ: Dominant Bangladesh thrash South Africa by 9 wickets, win series 2-1

The Soumya-Tamim show: The revised target of 170 was not enough on that track. The only chance South Africa had, was to take early breakthroughs. But some brilliant display of attacking batsmanship by young opener Soumya Sarkar and some mature batting by experience Tamim Iqbal sealed the deal for the hosts. They didn’t allow the South Africa to make any sorts of comeback in the game. All the bowlers failed to control the wet ball and the aggression of Soumya and Tamim. No Proteas bowler looked threatening at all. Apart from Kyle Abbott, every other South African bowler had an economy rate of more than six runs in an over. It shows the dominance of the Bangla openers who shared 154-run opening stand in just 148 balls. This was the game, set, match and the series for Bangladesh. 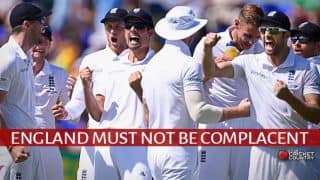